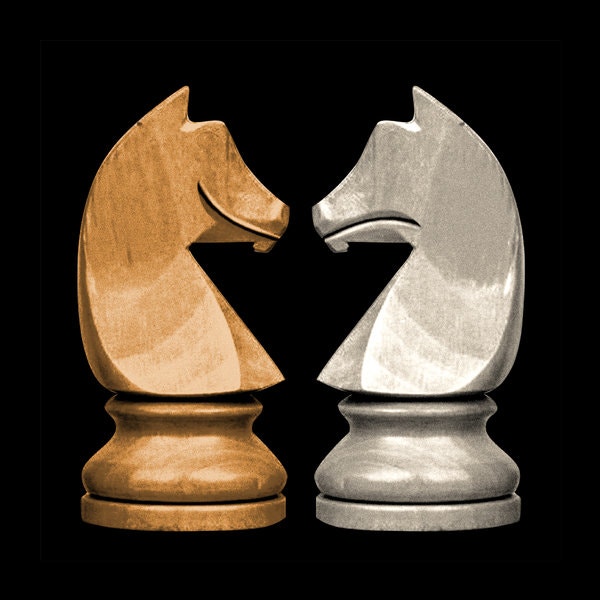 Chess helps answer the perennial human question, “What should I do next?”

You may have already figured out that our inalienable right to pursue happiness is self-defeating. Happiness may be with us, baked into our present moment, eagerly awaiting our grateful acknowledgment, but nothing is less likely to make us happy than trying to pursue it. On this analysis, we are right to desire happiness; it’s just that the predatory process of chasing it drives what we apparently want out of reach.

But perhaps the conundrum is deeper. The writer Oliver Burkeman observes that for a civilization so fixated on achieving happiness, we are remarkably bad at it. It seems to me that we might actually want something entirely different from happiness and not know what it is. At least, that’s what chess — which I’ve played since I was a boy, reaching the level of grandmaster — has taught me.

If you walk into your typical chess event and look around the room, you’ll see humans, mostly male, sitting in contorted postures, enraptured by the geometric cage fights they are caught up in. To the outside world we may look absorbed, transfixed even, but we are clearly not at ease. We enter this state willingly, under enormous competitive tension and high adrenaline, for hours at a time, decades at a time.

One might imagine that we endure this competitive intellectual strain as a necessary price for victory, which is perhaps part of happiness. But we are just as likely to lose, which is always much more painful than winning is pleasurable. So if we are pursuing happiness, both in terms of process and outcome, chess does not look like a good way to do it.

You begin to wonder how chess has managed to persist as a silent witness to at least 1,500 years of human history. While there are some alternative histories, the conventional wisdom is that the precursor of the modern game flowered in northern India at some point between 531 and 579. The game evolved through Persian, Arabic and European influences, with subtle changes to the names of the pieces and how they moved until about 1640, when the castling rule was established and the modern version of chess settled into its final equilibrium. Since then, for almost 400 years, chess has spread throughout the world and become an integral part of civilization.

The combination of global heritage, beguiling depth, strategic resonance and aesthetic charm makes chess much more than a game. In fact, I believe chess simulates the conditions for a life of meaning. Whether through work or love or art, life becomes more meaningful whenever we take responsibility for something or someone. Responsibility is not always pleasurable or even positive, but it is purposeful. It adds significance and direction to life and helps answer the perennial human question, “What should I do?” And while our lives are characterized by many things, they are defined most profoundly by the open secret of our inevitable deaths. Chess simulates the meaning of life because it is a ritual encounter with death in disguise, where we experience the responsibility to stay alive one move at a time.

The game is sublimated warfare, and chess players are compelled to kill, but the martial conceit of chess allows us to experience aesthetic liberation. Every battle is a unique story where two protagonists seek to destroy each other, but the underlying logic feels beautiful and true. The more intense the battle, the more we experience power and freedom.

Is that happiness? Not by any conventional definition. One of the most lucid contemporary definitions of happiness, from Paul Dolan, a professor at the London School of Economics, describes it as “the experience of pleasure and purpose over time.” That captures much that is important in life, but humans are too complex, restless, dark, impish and transgressive ever to feel at ease with feel-good purposiveness alone. The essayist and psychoanalyst Adam Phillips puts it well when he says that happiness is fine as a side effect, but it’s a cruel demand. I now think of chess not so much as a path to happiness as a ritual where we free each other from the pressure to be happy.

It is a relief to realize that happiness is not the most important thing in life. But what then are we seeking? My best guess — and I can only guess — is that we are seeking joy.

Joy is mysterious because we desire it as pleasure but cannot find it without pain. The subtlest and most enduring gift that chess gave me is the awareness that we can feel gratitude for life regardless of the happiness it offers at any given moment. Losing is painful but deeply meaningful. Competition is not of ultimate value, but we are often most alive in those arenas where winning and losing make sense.

Chess returns us to the perennial questions contained in any life situation: What is happening here? What am I trying to do? What’s my next move? Playing chess, we inhabit questions that matter, that we cannot be sure of answering correctly. In that sense, the game evokes joy as defined by C.S. Lewis in his autobiography: “An unsatisfied desire which is itself more desirable than any other satisfaction.”

That kind of joy is at the heart of the experience of chess, characterized as it is by a sense of constant craving in an atmosphere of intellectual beauty, competitive resistance and inevitable mistakes. Lewis suggests that anyone who has experienced joy of this kind will want it again, and he doubts whether anyone who has tasted it would ever exchange it for all the pleasures in the world. That is certainly true of many chess players.

Lewis adds that joy is not in our power, and he may be right. But it makes me wonder whether he ever played chess.