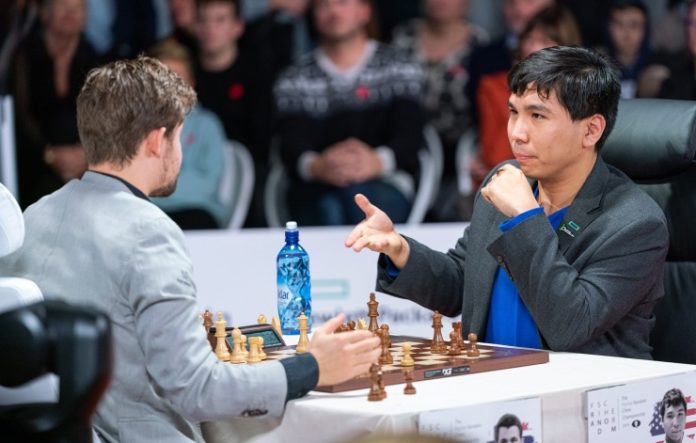 2-11-2019, OSLO, NORWAY: Wesley So took down Magnus Carlsen by 13,5 to 2,5. The final, played in Oslo, was a historical event in which for the first time the International Chess Federation recognized a new variety of chess.

At the Henie Onstad Kunstsenter art museum located close to Oslo, Norway, GM Wesley So became the first World Champion in Fischer Random Chess. So defeated GM Magnus Carlsen by the dominant score of 13.5 to 2.5 in the event that started on October 27 and ended on November 2. Wesley’s victory, with four wins and only two draws, was so crushing that he clinched the title with six rounds to spare. In fact, the American cruised through the whole final stage of the event without suffering a single loss, showing his supremacy in this recently developed chess variant.

The match’s fate was decided after Wesley won the second through fourth games. Magnus Carlsen, who hasn’t lost a game of classical chess since July 2018 and accumulates a streak of 101 games unbeaten, bit the dust three times in a row before his home crowd, who gathered in big numbers at the Henie Onstad Art Center in Bærum, Norway. The Norwegian has been the classical world champion since 2013 and the world-number-one since 2011 and has also been considered the unofficial Fischer Random champion, having won a match in 2018 against GM Hikaru Nakamura. “I just want to congratulate Wesley So, he played a lot better than me,” said the champion after his defeat.

Wesley So, who reached the number two spot in the FIDE world ranking back in 2017, achieves his first official world title in individual competition—filling a hole in an already brilliant career, with numerous victories in top-level events.

The event was organized by Dund AS, with Chess.com as a technological partner. “With FIDE’s support for Fischer Radom Chess, we are happy to invite you to join the quest to become the first, ever, FIDE World Fischer Random Chess Champion,” said Arne Horvei, Founding Partner in Dund AS. “Anyone can participate online, and we are excited to see if there are any diamonds in the ruff out there that could excel in this format of chess”.

“From the moment we were presented with the vision for this incredible event many months ago, we immediately recognized the potential milestone that an official World Fischer Random Chess Championship would represent for the chess world. Chess.com is proud to have organized the first truly open online qualification process which saw over 10,000 games played and became the foundation for crowning a worthy champion like Wesley So. We believe this is a first step on the path towards a prosperous and exciting future for chess through online and over-the-board harmonization.”