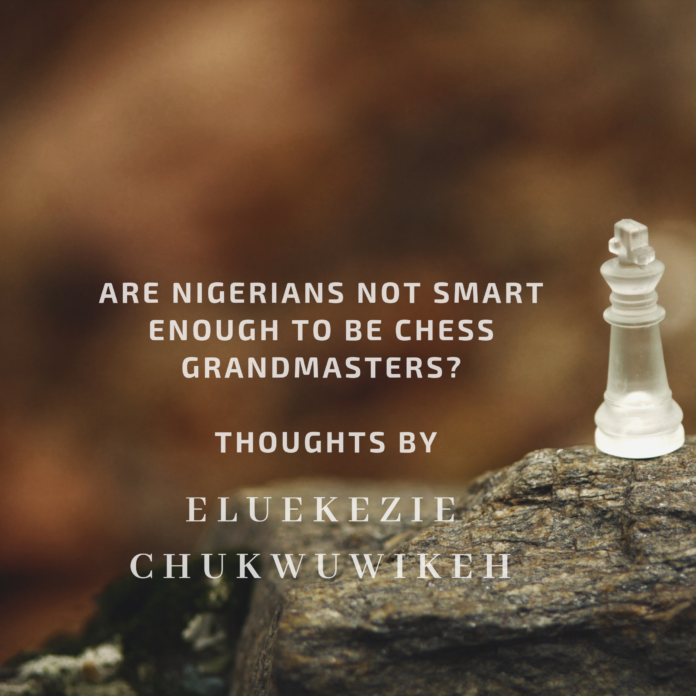 Before I delve into the crux of the matter, it is important that I state here that my deposition is based purely on observation, and educated inferences gotten from my experiences and interaction with Nigerian chessplayers, rather than on a properly conducted study or comprehensive research. However, I have done some research, but not extensive enough to draw ironclad inferences from.

That being said, the points I am about to raise are within the ambits of common sense acceptance and will probably be upheld by the global chess hive mind.

I am not one to make sweeping statements. Furthermore, after the achievements of the Chinese, Vietnamese, Indians, and more recently the Kazakhs and Iranians in the chess world, I definitely do not have the leisure of apportioning stereotypes, labels or any form of branding for that matter. But it must be said that Africans have not achieved much in chess.

At the risk of digressing, let’s put this in some perspective. Ladies are generally considered, by many, to be inferior to men at chess for varied reasons. This has precipitated countless debates, some very toxic and heated. Some would say, it’s debatable, fallacious or hard to prove. I say it’s harder to prove the contrary. And please don’t tell me about the Polgars or Hou Yifan. They are the exceptions, not the rule! Robert Howard stated the following in an article published by chessbase on 19th June, 2014:- “There are two theories to explain male predominance at the apex of intellectual achievement: some attribute it to some innate evolutionary ability differences, others to social factors of present day society.” He stated further, “The male predominance in chess parralels that in domains such as Mathematics, Physics and Engineering, which may tap some similar abilities and propensities.”

This may or may not sit well with the reader, depending on which way you sway. But there are stats and ‘hard evidence’ that back these arguments. Don’t take my word for it; ask Google. The fact that there is a pronounced male dominance in chess, like in a lot of other grey matter matters isn’t eye-popping or alarming by any stretch. But you might want to sit or even lay down somewhere comfy before reading the next sentence. As much as the lady folk have been maligned for their perceived chess ineptitude, they boast of more Chess Grandmasters that the 56 countries of the continent of Africa combined. You can throw in PONTUS Carlsson and MAURICE Ashley if you like (it would be akin to giving Dangote $2billion so he could measure up with Bill Gates; an exercise in futility).

The number of female Grandmaster more than doubles that of African Chess Grandmasters by a mile. There are about 40 of them; Africa has 14, Sub-Saharan Africa has just 2 out of that number. What’s worse is, out of that 2, just like Maurice Ashley, Amon Simotowe has long retired. Leave matter jare! Let’s face Nigeria.

It’s troubling to put it mildly.

What are we doing wrong? Or, what are we not doing?

Below is a list of 18 questions, which I’d love the reader to make into a questionnaire.  Pass it to the Nigerian chessplayers you know.

1. How often do you play chess?

2. What time controls do you play with predominantly?

3. Do you consider yourself a chess addict?

4. What exactly about/in chess are you addicted to?

5. Do you consider yourself a professional chessplayers?

7. Do you think one can make a living by being a chess professional in Nigeria?

8. How many chess books have you read in part or fully?

9. Do you consider most chess books to be predominantly reference material, or do you strive to read them from start to finish going through every single analysis?

11. What’s the frequency of your chess study?

12. If daily, how many hours do you put into your chess study per day?

14. Is your study planned, and do you have targets and/or goals.

15. Would you fancy becoming a Chess Grandmaster?

16. Do you believe you could ever become a Grandmaster?

18. In percentage (%), how would you rate your chances of becoming a Grandmaster in Nigeria?

I had to state everything above before stating what I think the problem is.

Firstly, we love to play chess; as a matter of fact, most of us are actually mildly addicted to playing chess. And when we play, it is mostly blitz games (which is another anchor in itself). But we don’t like to study. And when we study, our efforts are mostly wasted as we lack the guidance and direction of seasoned trainers. And in the remote possibility that we are studying the right thing and in the right direction, most of us lack the requisite work ethic to make any meaningful progress. Garry Kasparov once stated that he studied chess an average of 16hours daily. Parham Maghsoodloo, one of the Iranian rising stars, already in the top 100 stated that he studies between 12 to 15 hours daily, and would still study at least for 10hours on his “bad days”.

The second debilitating factor is DOUBT. It took Anand to become a Grandmaster for Indians to see that it was possible.Now they have 64 Grandmasters!  Most Nigerian chessplayers don’t believe it’s possible. And those that remotely believe think it’s a waste of time.

Then there are the social constraints, erroded institutions, financial wahala and other yamayama every average Nigerian has to grapple with. To worsen matters, the game is not a spectator sports, so chessplayers have to double as chess fans. So the star status is diminished, and along with it, the resultant motivation.

Lastly, we don’t have quality trainers. Despite the world becoming a global village, most of us consider the fees charged by online trainers to be either exorbitant or just unaffordable.

However, chess history is littered with self-taught and self-made Grandmasters like Paul Morphy, Bobby Fischer, Yasser Seirawan, and Malik Mir Sultan Khan (1905 –1966) who won the British Championship three times (1929, 1932, 1933), in only four attempts!

Garry Kasparov rightly noted that Hardwork is a talent.

Use your tongue to count your teeth.