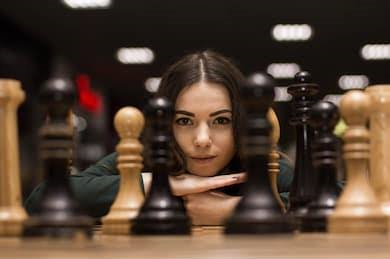 Of course not — but stereotypes can have a real effect on performance.

One of the most talked-about findings in psychology today is “stereotype threat” – a phenomenon in which a person experiences anxiety because of the fear of confirming a negative stereotype. Research has shown that stereotype threat can lead people to perform worse than expected. For example, women make more mistakes on a math test after being reminded of the stereotype that men are better at math.

Despite hundreds of studies showing its effects, stereotype threat remains controversial as an explanation for real-world performance gaps. This is partly because most studies have been done using college students in carefully controlled laboratory experiments, leaving open the question as to whether stereotype threat operates the same way in more complex real-life situations.  Also, since most stereotype threat studies have looked at adults, it’s not clear whether children and teenagers would suffer from its ill effects. Psychology professors Hank Rothgerber and Katie Wolsiefer decided to tackle both of these issues by looking at whether stereotype threat affects young girls who play in chess tournaments. For many people, the idea of a famous chess player evokes the image of someone smart yet nerdy—and male. Do societal ideas about who makes for a better chess player impact the performance and motivation of girls who play chess?

Rothgerber and Wolsiefer surveyed 77 girls between the ages of 6 and 11 and found that the girls showed awareness of the stereotype that boys are better at playing chess than girls. The researchers then gathered and analyzed data obtained from the United States Chess Federation (USCF). The data included information about female players from elementary, middle, and high schools who had competed in twelve tournaments. To control for the possibility that all chess players, both male and female, perform worse when playing against a male opponent, the researchers included a comparison group of young male players.

The results showed that when playing against a boy, girls were less likely to achieve an expected win. However, this was only true when they were playing moderate or strong (but not weak) male opponents. Since stereotype threat is supposed to be most pronounced in challenging rather than easy situations, it makes sense that the girls were more likely to falter when playing moderately or very challenging opponents but not weaker ones.

Psychologists have hypothesized that repeated exposure to stereotype threat might cause people to avoid the activities that are causing the threat. In other words, one reason why women may shy away from math-oriented careers is because of their previous experiences with stereotype threat in math-related situations. To see if this might be happening with young female chess players, Rothgerber and Wolsiefer looked at the number of tournaments played by their research participants in the following year. In addition, they calculated the number of months that passed until each player competed in their next tournament. They found that girls who performed more poorly than expected tended to play in fewer tournaments the following year. They also waited longer before competing again. For boys, their performance was unrelated to their later decisions to continue playing. Therefore, only girls who perform more poorly than expected seem at risk to give up on chess.

This research demonstrates that stereotype threat may, in fact, thwart performance in real-world situations. Even outside the laboratory, where there are so many variables at play, stereotypes have the potential to cause vulnerable individuals to falter. Overall, the study suggests that stereotype threat may be an issue for even young girls and may contribute to girls’ early avoidance of certain activities. To prevent girls from giving up in areas where they are negatively stereotyped, parents and educators may need to step in early. In the past decade, researchers have developed and tested a number of simple strategies to combat stereotype threat. If adopted for girls who play chess, these strategies could include providing young girls with role models of successful female chess players and emphasizing that chess ability is something that can be improved through practice rather than something you are born with. Another strategy might be to frame chess ability in terms of qualities that have nothing to do with gender—such as problem-solving and concentration skills.

Perhaps the most interesting aspect of stereotype threat is that we are all vulnerable to its effects. All of us have some aspect of our identity that could be stereotyped. While young girls suffer from stereotypes about being worse at math and science, boys also face stereotypes about being less thoughtful, caring, or artistic. Rothgerber and Wolsiefer’s results suggest that societal gender stereotypes may affect children’s interests from a very young age. Gender differences that appear normal on the surface may actually have their roots in stereotypes that get in the way of children’s enjoyment of activities that have been deemed more appropriate for one gender or the other. When children become discouraged, society may pay a price by losing out on a talented individual who would have otherwise contributed a great deal to a particular field. However, a greater awareness of these stereotypes, and how to overcome them, may allow parents and teachers to intervene early so that children don’t give up on things that may benefit them—as well as the rest of us—in the long run.