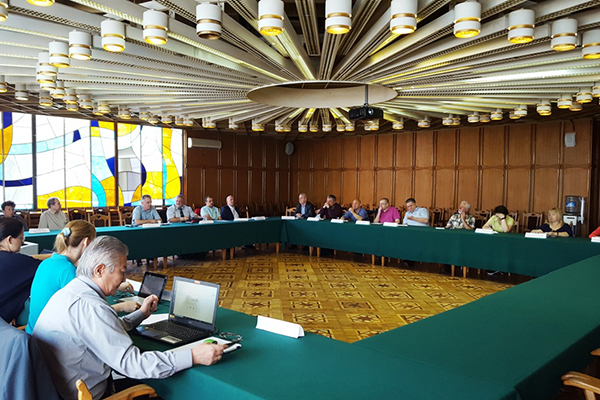 The Project’s objective is to train and to certify a cadre of IAs, especially female arbiters, who are on top of all recent changes in the Laws of Chess and the FIDE Competition Rules, plus are able to communicate in English efficiently and to be integrated into multinational arbiter teams at the top-level FIDE events, culminating in the Chess Olympiads 2020 and 2022.

The unique innovative approach by the Chess Federation of Russia offered the leading International Arbiters of this country both an intensive refreshment course on the most difficult areas of high-level arbitering and a chance to practice and to apply new skills during the 2019 Russian Rapid and Blitz Championships. Most of the workshop attendees will be working as a cohesive international team during the next week’s individual and team Rapid and Blitz events.

The Principal Lecturer, IA/IO/FL Alexander Tkachev (RUS), the CFR Technical Director, opened the Workshop by summarizing lessons learned from previous Pilot Project events in Moscow, Tashkent and Baku. Mr. Tkachev proceeded with a refresher on Anti-Cheating Guidelines, then IA Vladimir Makhnev gave a crash course on the use of modern metal detector.

During a group discussion on the FIDE Competition (Tournament) Rules, the workshop attendees shared their opinions on a wide range of issues that challenges of modern life bring into the chess world. Pharmacology’s impact on chess competitions, anti-doping measures, use of metal detectors on players with pacemakers or artificial limbs, dress code limitations, upcoming brain prosthetics, general standards for electronics used in tournaments, priority of the host nation’s laws were discussed.

The Guest Lecturer, IA/IO Vadim Tsypin (CAN) gave a refresher on the chess terms glossary in English, then led the participants in a practice of using English in typical tournament situations. On the second day, Mr. Tsypin proceeded by presenting real-life chess game situations that sharpened the attendees’ analysis and communication skills. IA Elena Polovina and IA Vera Penzina helped animate a group discussion.

IA Mikhail Kryukov shared some of the best practices that were developed in Russia for arbitering in Rapid and Blitz competitions. Led by the Chairman of the CFR Arbiters’ Commission IA Vladimir Staratorzhsky, the attendees enthusiastically decided to adopt them for the upcoming Russian R&B championships.

For the first time in history, an examination test featured an equal number of questions in Russian and English. An experienced IA/FL Alexander Shaab obtained the best exam score. (The full testing results will be published on the CFR site shortly.) A post mortem discussion allowed participants to see their marked tests, to review difficult questions with the Lecturers, and to provide feedback on the Workshop. Several IAs asked to extend such events to three full working days.

The next Pilot Project IA Workshop in the Russian Federation will take place in Moscow in January 2020. Look for upcoming announcements on our site!