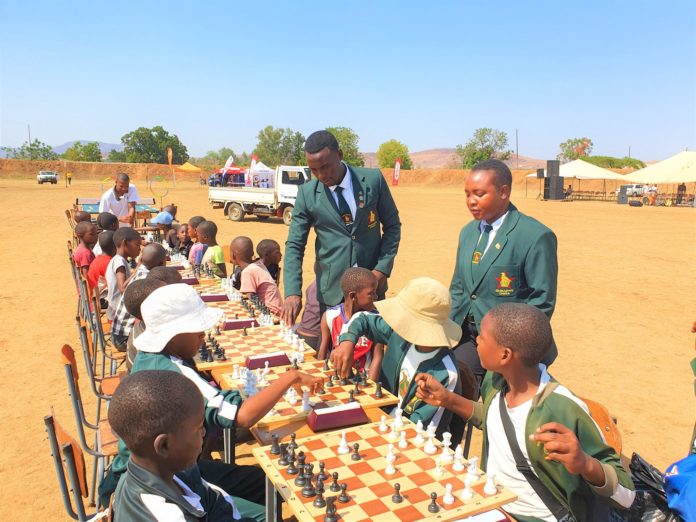 The Zimbabwe Chess Federation supported the 4th edition of the Family Fun Day and Sports Festival hosted by the first lady Amai Auxillia Mnangagwa at Chipadza Stadium in Bindura. One hundred and fifty-three (153) children of all ages participated in the chess games with many actually learning to play the beautiful game of chess for the first time.

The chess exhibition stand was the main centre of attraction at the event as it provided a positive social and recreational motion that could be learnt and enjoyed by all ages. The enthusiasm and interest from particularly the youngest kids, many as young as four years of age were immense. The ZFC officials involved in the coaching sessions also emphasized that several studies around the world have proven that the game of chess helps to promote intellectual growth and improves the academic performance of learners. Some of the children who learnt chess on the day also got an opportunity to play some games against the First Lady.

The First Lady emphasized on the importance of such events which boost and fortify the happiness index of all communities for their wellness and social wellbeing whilst promoting peace, unity and tranquillity.

The president of Zimbabwe Chess Federation, Dr. Collen Tongowona indicated that this was not the first time that they have supported the Family Fun Day and Sports Festival hosted by the First Lady as there are great opportunities to showcase the beautiful game of chess. He also took the opportunity to mention that the Zimbabwe Chess Federation has put a motion to use chess not only for the sake of creating better chess players but to also to improve on children’s educational outcomes. “A pilot programme is already operational in Matabeleland North Province and Mashonaland Central Province is the next in line,” he said.

The ZCF president was also quick to point out that it is part of the main mandate of the Zimbabwe Chess Federation is to enhance such exposure of the game of chess to all communities in Zimbabwe. He also appealed to the corporate sector and the government to continue to support efforts aimed at grassroots development programs. “This is critical if we are to transform the country in future as chess is a tool that the nation can use to groom scientists, mathematicians, doctors and engineers of the future as well as to develop future generations of strategic thinkers that will leapfrog the growth of our economy,” he said.