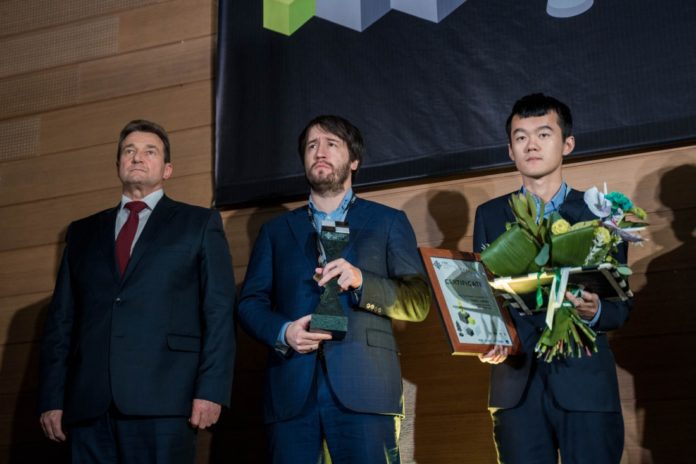 Tie-breaks of the FIDE World Cup Final and 3rd place match were played on October 4 in Khanty-Mansiysk.

Teimour Radjabov had White in the first rapid game. The advantage passed from one player to another a few times, yet the game ended in a draw. The second encounter took a calmer course and quickly reached the peaceful outcome.

In the first 10-minute game Radjabov got an advantage as Black in the English Opening, but Ding Liren managed to survive. In the second 10-minute game the opponents also preferred not to break lances and shook hands on the 30th move.

In the first blitz game, Radjabov outplayed his opponent in a minor piece ending with Black, although Ding Liren did not fully exploit the defensive potential of his position. In the return game, the Chinese grandmaster tried to mount a comeback but was eventually defeated as well.

Thus, the score in the Final is 6:4 in favor of Teimour Radjabov, who becomes the winner of the 2019 FIDE World Cup.

In an interview afterward, the Frenchman said he is very happy about his play in the rapid games. He is planning have some drinks with his friends, get some rest and then start his preparation for the 3rd leg of the FIDE Grand Prix in November.

Before the main prize-giving ceremony, Mark Glukhovsky, Executive Director of the Chess Federation of Russia, announced the winner of the Brilliancy Prize, provided by the Russian Chess Federation in cooperation with AB InBev Efes.

We remind you that a jury led by Maxim Notkin, Chief Editor of 64-Chess Review, made shortlists of 4-5 most exciting games after the rounds 1-2, 3-4, and 5-6. After that, an online poll was created and announced on the official site of the event and social media. The candidate games of the main and consolation finals were nominated by the jury.

The experts awarded the Brilliancy Prize to Ding Liren for his victory vs. Radjabov. The Chinese grandmaster received an elegant trophy.