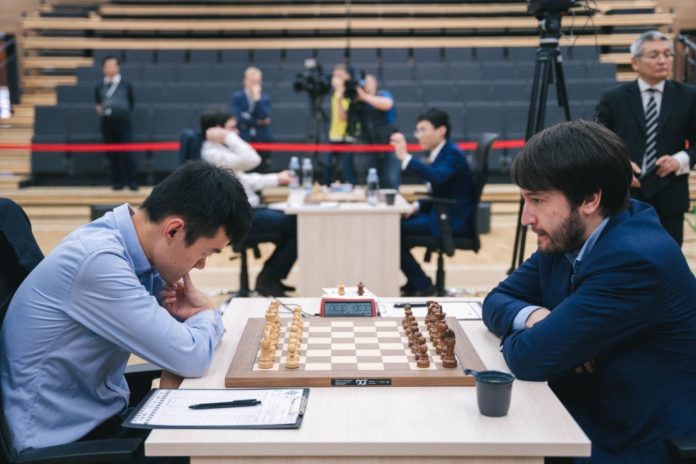 The fourth games of the Final and the 3rd place match of the FIDE World Cup were played on October 3 in Khanty-Mansiysk.

Ding Liren and Teimour Radjabov played a variation of the English Opening, in which Black sacrifices a pawn, but obtains certain compensation in the form of insecure position of the white king. The game quickly transposed to an endgame, where White’s ruined pawn structure left him little chance of converting his extra material. According to Ding Liren, he was not prepared for 11… Bg2. Black regained a pawn in a rook ending and fully equalized the position. A draw was agreed on the 31st move.

Maxime Vachier-Lagrave and Yu Yangyi once again played the Petrov’s Defense. According to the Frenchman, his position was better, however, he was unable to increase this advantage, and after multiple exchanges, the position equalized. The opponents agreed to a draw in a queen ending.

Since the classical parts of both matches ended in a 2-2 tie, the winners will be determined on tiebreaks today, Friday, October 4.

In the first rapid game, Teimour Radjabov and Maxime Vachier-Lagrave will have White against Ding Liren and Yu Yangyi respectively.