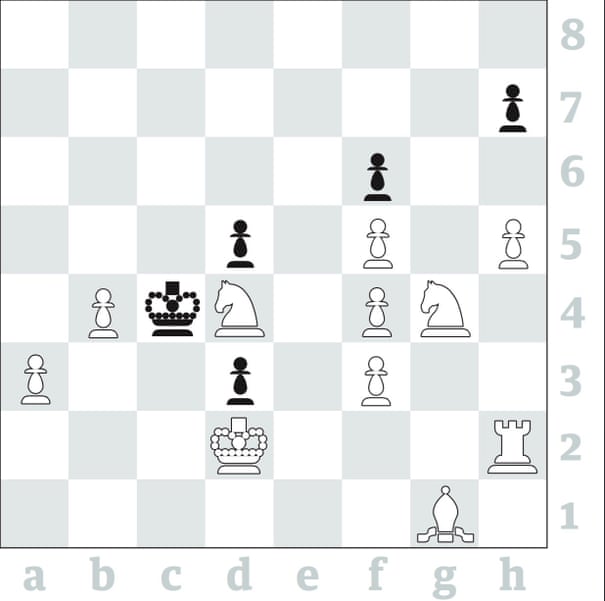 China’s world No 3, Ding Liren, is favourite to become the next challenger for Magnus Carlsen’s global crown but the 26-year-old’s chances of winning the deciding 2020 candidates could hang on what happens when he plays his compatriot Yu Yangyi in tie-break games on Saturday starting at 11am. Their games will be free and live to view online with expert commentary.

The Ding v Yu semi-final in the $1.6m World Cup at Khanty-Mansiysk, Siberia, is tied at 1-1, two draws, after the regulation classical games and will now be settled by speed tie-break games at increasingly faster time rates.

Yu, 25, was not expected to reach the semi-final but in his last two matches the world No 15 has knocked out Russia’s Ian Nepomniachtchi and Nikita Vitiugov, recovering from losing positions against both.

The semi-final winners, Azerbaijan’s Teimour Radjabov and either Ding or Yu, both qualify for the 2020 candidates to decide Carlsen’s next challenger but Ding already has an assured qualification place via his world No 3 rating.

International Chess Federation (Fide) rules state that the World Cup qualification has a higher priority than that derived from ratings. So, if Ding reaches the final, his rating place would go to the next in line, most probably the world No 4, Anish Giri of the Netherlands.

Ekaterinburg is the venue for the candidates and on home ground Russia could have as many as three of the eight players. Two places go to the top finishers in the Fide Grand Prix, where after Moscow and Riga, with Hamburg and Tel Aviv events still to come, Nepomniachtchi and Alexander Grischuk are well placed to qualify. The candidates organising federation also nominates a wildcard, which would likely be the 2016 world title challenger, Sergey Karjakin.

Players from the same country have to meet in early rounds of the candidates but three out of eight, if it happens, would be a major advantage for Russia. Ding’s chances to become Carlsen’s challenger would be much stronger if Yu is also in the field.

If Ding does lose Saturday’s tie-break, there will inevitably be calls of “fix”. For Ding, a championship match against the legendary Carlsen is the prize above all else, and he will see a helping hand from Yu as a counter to the weight of Russian numbers stacked against him. His action will be damaging to the highly ranked Giri, who is unlikely to qualify by a different route, but sympathy for the Dutchman will be muted since he played in the 2016 candidates while his public image has been damaged by his reputation as a chronic drawist.

The candidates, and events leading up to it, already has some history of arranged results and of Russian players ganging up against a dangerous rival. At the end of the very first candidates in Budapest 1950, the leader Isaac Boleslavsky made tame draws in his final two games to allow his friend David Bronstein, judged to have better chances in a title match against Mikhail Botvinnik, to catch up.

At Curacao 1962, a 28-round tropical marathon where the participants needed to ration energy, there was a non-aggression pact among Tigran Petrosian, Paul Keres and Efim Geller who made quick draws among themselves and played hard against Bobby Fischer and Viktor Korchnoi. In the last round of the 1970 interzonal in Palma de Mallorca, Milan Matulovic accepted a bribe from Soviet officials to lose to Mark Taimanov, who qualified but then famously lost 6-0 to Fischer.

The other World Cup semi-final featured Radjabov’s smooth, impressive and classical win, where his only blemish was to miss the stronger 19 b4! The Azerbaijani, 32, has played rarely in the last few years but will now be favourite to win the final and the World Cup if Yu Yangyi turns out to be his opponent. Maxime Vachier-Lagrave is France’s best ever player and is ranked in the top 10, but at age 29 he has never qualified as a candidate.

Earlier, Yu Yangyi scored a farcical quarter-final victory over Nikita Vitiugov in sudden death Armageddon, needed due to a 4-4 match score. The Chinese player carelessly conceded two pawns in the opening and the Russian could then also have won a piece by a simple 17th move.

Vitiugov failed to see the easy opportunity, made a series of errors and lost. At the end Yu quickly signed the score sheets and left the playing hall, while Vitiugov sat for several minutes staring at the board in disbelief.