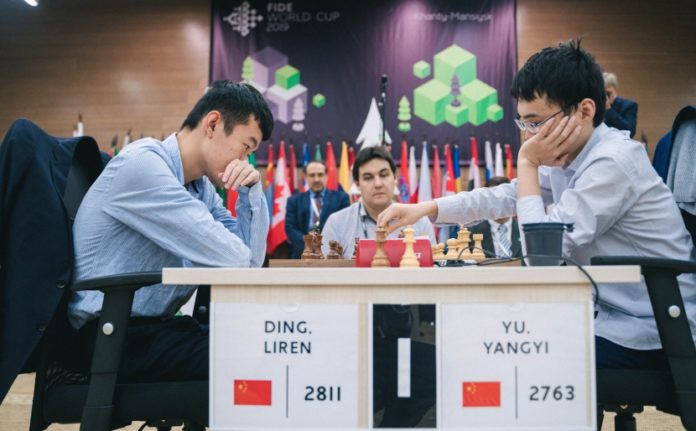 The second semifinal match of the FIDE World Cup between the Chinese grandmasters Ding Liren and Yu Yangyi was decided on the tie-break on September 28.

Playing White in the first rapid game, Yu Yangyi sacrificed a pawn in the Nimzo-Indian Defense. The game quickly transitioned to an equal endgame. Since both grandmasters showed a deep understanding of the resulting position, a draw was a logical outcome.

In the second encounter, the opponents opted for English Opening. In a very sharp and double-edged variation, Black sacrificed a pawn and then an exchange for which he got sufficient compensation. Yu Yangyi could have even claimed a certain edge, but a couple of inaccurate moves from his part under time pressure allowed White to consolidate. On the 33rd move, Black made a mistake, which led to trading the queens, and White’s extra exchange told in the subsequent play. Ding Liren celebrated a victory on the 43rd move and advanced to the final.

After the game, the rating favorite of the event told that since the previous World Cup in 2017, where he had also advanced to the final but lost to Levon Aronian, his play has improved. “Now I am the top seed; also I am facing a different opponent. At least, playing for the first place is much better than playing for the third place”, said Ding Liren with a smile.

As you might know, both finalists of the 2019 FIDE World Cup automatically qualify for the Candidates Tournament, which will take place in spring 2020 in Yekaterinburg, Russia. According to the Regulations, the third place finisher of the World Cup also has a chance to be among the candidates, if he is nominated by the organizers.

September 29 is a rest day.

The final match and the match for third place will start on Monday, September 30. Both matches consist of four classical games and, if necessary, will be concluded on tie-break.