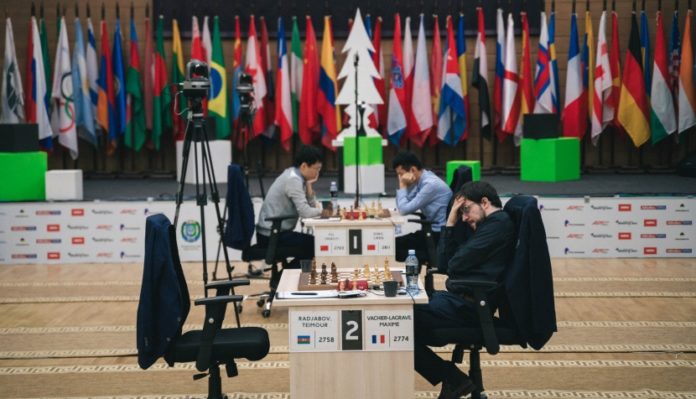 The FIDE World Cup Semifinals began in Khanty-Mansiysk on September 26.

Ding Liren and Yu Yangyi played the English Opening. After the game, the rating favourite confessed that he had mixed up something in the opening and ended up in an inferior position. However, noticeably tired after a dramatic tie-break yesterday, Yu Yangyi did not manage to pose serious problems for his friend and compatriot. The game was drawn by a threefold repetition on the 27th move.

Maxime Vachier-Lagrave and Teimour Radjabov had an opening discussion in the Rossolimo Sicilian. The Frenchman had White and improved his play compared to a recent game against Magnus Carlsen. However, after the queens were exchanged, Black reached a safe and comfortable position. Moreover, with the rooks leaving the board White needed to demonstrate some accuracy to preserve the balance. Black, for his part, decided not to squeeze water from a stone, and a draw was agreed on the 31st move.

The return games with the colors reversed will be played on September 27.