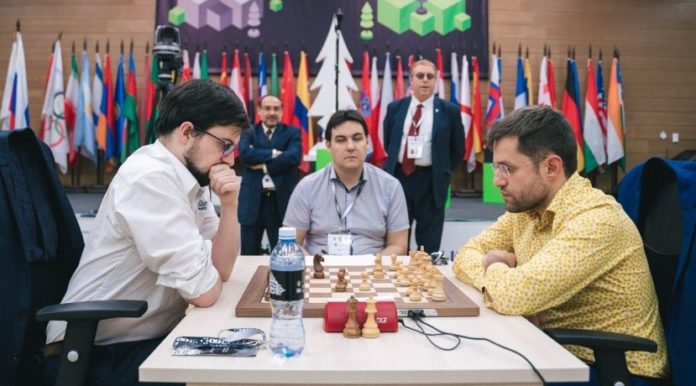 Two tie-breaks of the FIDE World Cup Quarterfinals were played in the Ugra Chess Academy on September 25.

Levon Aronian and Maxime Vachier-Lagrave drew their first rapid game and then played a highly dramatic second encounter. Aronian, having Black, sacrificed an exchange and created a very dangerous attack on the enemy king. White’s days seemed numbered but a couple of inaccurate moves by the Armenian let the Frenchman consolidate his position.

Levon’s misfortunes did not end here: on the move 38, he committed a fatal blunder that gave White a winning advantage. After the queens left the board, the remaining white rook proved superior to the black knight, and Maxime Vachier-Lagrave advanced to the World Cup Semifinals.

Yu Yangyi and Nikita Vitiugov started their tiebreak with two draws in rapid games. The Chinese grandmaster prevailed in the first 10-minute game, squeezing a win in a rook ending with an extra pawn but not without some help from his opponent: on the 59th move, Nikita faltered, leaving his pawn unprotected. To Vitiugov’s credit, he staged a comeback in the second encounter after a lengthy and tense fight.

As both blitz games ended in a draw, for the second time at this World Cup an Armageddon game decided the match outcome. Yu Yangyi got White and by the move 17th, his position was in shambles. However, after several substandard moves by Vitiugov, the Chinese GM grabbed the initiative and won the ultimate game, thus becoming the last semifinalist of the World Cup.