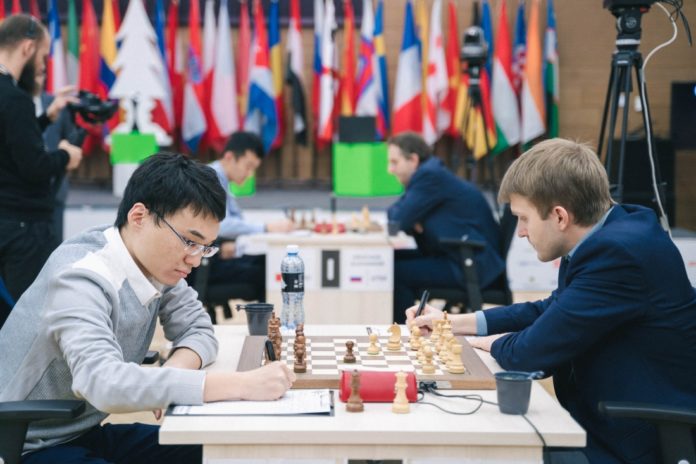 First games of the quarterfinals were played in Khanty-Mansiysk on September 23.

Xiong – Radjabov was a relatively quiet draw. Minor pieces were exchanged quite early, but Black managed to invade White’s camp with his queen, forcing the opponent to demonstrate certain accuracy. Nevertheless, the position remained objectively even and ended in a draw by repetition on the 30th move.

Levon Aronian and Maxime Vachier-Lagrave also produced a solid draw in the Gruenfeld Defense. After massive exchanges early in the opening, a minor pieces ending arose. With an accurate play, Black neutralized all possible threats and then sacrificed a pawn, which led to a drawn ending with opposite-coloured bishops. The opponents shook hands-on 44th move.

Alexander Grischuk and Ding Liren had a theoretical discussion in a sharp line of the Catalan, in which Black sacrifices a pawn for the initiative. At the critical moment of the game, White was ready to sacrifice an exchange, but instead of accepting the offer Black traded a rook for a knight himself. A dynamic manoeuvring battle with unbalanced material ensued, resulting in a draw right after the control was passed.

Nikita Vitiugov and Yu Yangyi battled in the Najdorf Sicilian with 6.g3. Initially White got a certain edge; however, after the game, the Russian confessed that he was not happy with his actions after the opening. Later in the game, Black sacrificed an exchange, obtaining a powerful bishop pair that secured him sufficient compensation. Nikita decided not to push his luck and the opponents settle it in a peaceful manner on the move 43.

The return games with the colours reversed will be played today on Tuesday, September 24.