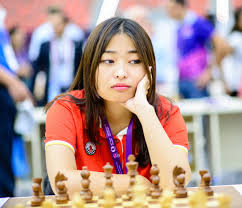 Ju Wenjun and Humpy Koneru won with 1½ and 1 point ahead of the rest of the field respectively. After the 8th round, the first leg of the Women’s Grand Prix in Skolkovo is starting to feel like these two women race. The clash between the current World Champion Ju Wenjun and the former World Champion Alexandra Kosteniuk (2495) was won by the Chinese player. Ju came out of the Catalan opening with a slight advantage and improved her position with caution. When given a chance to take the game to a rook endgame with a better pawn structure, she went for it without hesitation. The Ju Wenjun demonstrated excellent technique, getting a passed pawn and avoiding any counterplay from her opponent. She achieved her third victory in a row, raising her score to 6½ out of 8 games.

Humpy Koneru also won her game, with black pieces, inflicting Elisabeth Paehtz her first defeat in this tournament. Humpy once again played the Petroff Defence, and after an inaccuracy by Paehtz, she got a better endgame and converted her advantage into a full point. With this victory, the Indian record holder manages to keep the pace with the tournament leader, and will probably maintain the excitement until the last moment, since she will play Ju Wenjun in the last round.

The third one in the standings is Aleksandra Goryachkina, with 5 out of 8, a full point behind Koneru and 1½ behind Ju. Goryachkina went for a standard Variation of the King’s Indian Defense against Alina Kashlinskaya. The position was double-edged: Kashlinskaya launched a pawn attack on the kingside; however, Goryachkina came up with an effective way to gain space advantage on the other side. The opponents settle for a draw after a threefold repetition on the move 40.

Two players, namely Valentina Gunina and Pia Cramling managed to put themselves together and come back after having suffered several defeats in a row.

Gunina, who had capitulated in seventh and eighth rounds, played Bishop’s Opening with white pieces against Kateryna Lagno. The game came down to a rook endgame in which White had an extra pawn, but with accurate play, it should have probably been a draw. However, Lagno made some dubious moves by her rook and found herself in a losing position.

It took Pia Cramling50 moves to take down Marie Sebag. The French Grandmaster played Slav Defence with black pieces but somehow allowed Pia Cramling to grasp the initiative. This time around, the Swedish legend displayed her proverbial excellent technique and converted her advantage into a flawless victory.

The Ragozin was played in the game between former World Champion Antoaneta Stefanova and Harika Dronavalli. Stefanova started a kingside attack with g4 but Harika countered this aggression by opening up the center and targeting white’s king on e1.  However, Stefanova found a rook sacrifice that allowed her to seal the draw with a perpetual check.