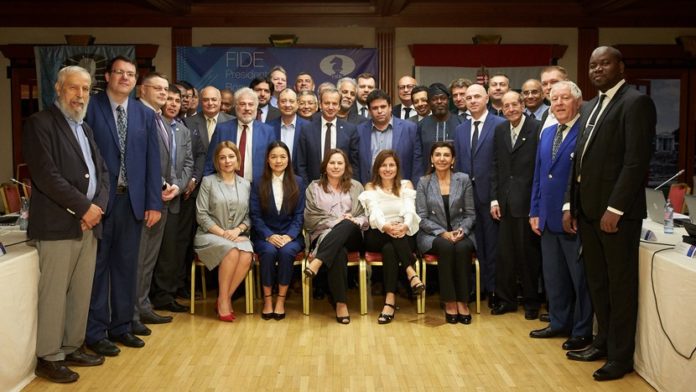 List of the main decisions taken at the 2019 Third Quarter Presidential Board meeting in Budapest (7-8 September):

1) The joint bid of Shanghai (China) and Vladivostok (Russia) to hold Women’s World Championship match in January of 2020 has been approved. Thanks to the consolidated effort of two cities the guaranteed prize fund of the match reached €500,000 (2.5 times as much comparing to the previous classical World Championship match in the spring of 2018). The match will be played in both participants’ native countries, thus ensuring full equality for the opponents.

2) The bid of Yekaterinburg (Russia) to hold FIDE Candidates Tournament in the spring of 2020 has been approved. Yekaterinburg is known for its long chess traditions – it is sufficient to recall that in 2006 the city hosted the knockout Women’s World Championship; the local team has won the European Chess Club Cup. FIDE expects the highest level of organization of the upcoming event.

3) The deadline for submission of bids to hold theWorld Championship match has been extended to November 1, 2019. We reaffirm that several potential organizers are showing strong interest to host the match, although for some operational reasons the formal bids are yet to be submitted. We are confident that the extended period of bids submission will help up us to provide the best conditions for the participants of the upcoming match. FIDE is aiming to take the match to an entirely new level – both in terms of its organization and global visibility, as well as from a financial standpoint.

4) The Presidential Board has adopted new revolutionary rules for the FIDE World Cup 2021. Under the new rules, the number of participants will be substantially increased from 128 to 206 players which will make the event more representative and enhance overall interest to chess. Dozens of federations will get a chance to nominate their best players – and that is for the first time in history. All extra expenses will be covered by FIDE.

5) After considering the suggestions to reduce fees, FIDE Presidential Board recommended submitting for approval by General Assembly a substantial reduction in fees, including: 40% reduction on youth competitions fees; waiving all veteran fees; waiving all fees for the developing countries (levels 4-5); 50% reduction for level 3 countries; a quota for additional 30% tournaments to be rated for free (countries level 1-2). We consider such a substantial reduction as the fulfillment of the obligations we had committed to during the electoral campaign.

6) The Presidential Board essentially approved the draft of a new FIDE Charter developed by the Task Force and requested to finalize it by incorporating the comments made at the meeting. This project is aimed to improve FIDE’s functioning in the current context given all the modern managerial challenges. Needless to say that FIDE is open to all constructive suggestions and comments from National Federations, which keep coming.

7) To implement FIDE’s fee reduction and to adopt new FIDE Charter as soon as possible, the Presidential Board decided to hold an unscheduled FIDE Assembly later this year. All the related materials will be published in strict conformity to the Statutes, no later than a month before the start of the Assembly.