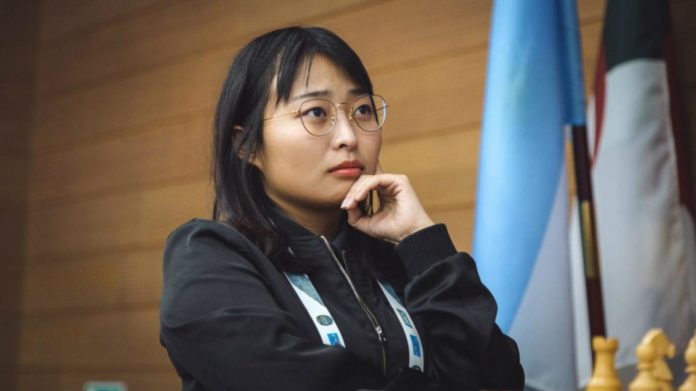 The leader of the tournament Ju Wenjun (2576) scored an important victory in the 7th round, with the Black pieces, against Valentina Gunina (2502). In a Neo-Catalan Defense, the World Champion solved the problem of c8 bishop in the early stage of the opening, managed to demolish white’s centre with the well-known c5 idea, and soon achieved equality. Black took control of the central open columns and that allowed her, first to gain a pawn, and then to launch a decisive attack against Gunina’s king.

Humpy Koneru defeated Antoaneta Stefanova in the Exchange Variation of the Gruenfeld. The Indian Grandmaster came out from the opening with a little edge, and little by little she improved her position. Stefanova decided to sacrifice an exchange in order to create some counterplay, but this left her king very exposed. As a result, the former World Champion got trapped in a mating net later on. With this win, Humpy jumps to the clear second position; she is just half-point behind the leader Ju Wenjun.

It was a good day for the Indian players since Harika Dronavalli also won against Pia Cramling in 70 moves. The former world number one female player lost many tempi with her queen, while her king was still placed in the centre. Harika rapidly opened the position and went for a typical set up with an isolated central pawn, but in which she had control of the open columns and diagonals. Cramling followed the textbook and blocked the pawn with her knight; she then managed exchange rooks and kept bishop and knight against Harika’s pair of bishops. The position equalised, but then Pia became ambitious and decided to break through with 58…f5, an advance that got her in trouble. She lost a pawn, and Harika quickly took the opportunity and grabbed the whole point, inflicting the third consecutive defeat to the Swedish legend.

The sharp Kmoch Variation of the Nimzo Indian Defense was played in the game between Alina Kashlinskaya and Alexandra Kosteniuk. In a double-edged position, Kashlinskaya sacrificed an exchange to get rid of one of Kosteniuk’s knights, which had penetrated her position. It was probably the right decision in order to play for a win, but a few moves later, 38.Bd4 instead of 38.Nd4 turned the tables and allowed Kosteniuk to launch a decisive counterattack.

The World Champion Challenger Aleksandra Goryanchkina chose the Fianchetto Defence against Marie Sebag‘s Ruy Lopez. Sebag obtained a slightly better position out of the opening, forcing Goryachkina to play with precision. The game came down to an equal endgame, and the players shook hands on the move 41, adding half a point to their scores.

The clash between Elisabeth Paethz and Kateryna Lagno turned out to be the shortest game of the event. A very sharp variation of Tarrasch Defence arose on the board, but both players seemed to be following their preparation, maybe all the way up to the final position. The game ended in a perpetual check, in just 25 moves.