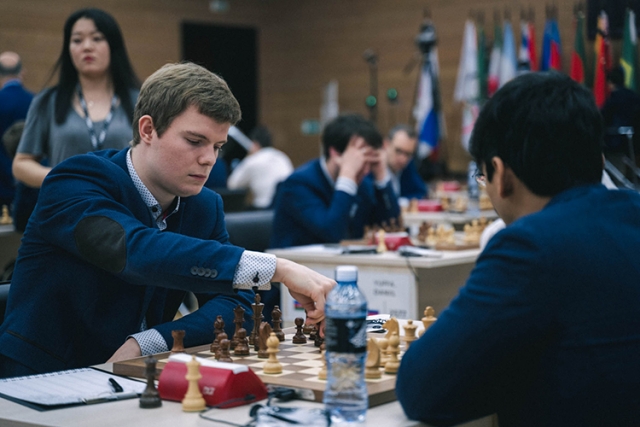 Round 3 of the FIDE World Cup was played on September 17, 2019. The tournament’s sensation Kirill Alekseenko (Russia) defeated the higher-rated Pentala Harikrishna (India) for the second time in a row. The Indian GM sacrificed the knight for two black central paws transposing into an unbalanced position that very well suited his aggressive agenda. However, in the ensuing complications, Kirill was up to the challenge. The Russian GM timely sacrificed an exchange and got excellent compensation in the form of two bishops and the advanced pawn on c3. One inaccuracy from Pentala shortly thereafter was enough to dash his hopes to advance into the next round.

Alexander Grischuk (Russia) also won both games against Xu Xiangyu (China). In their second encounter, he obtained a very comfortable position with a substantial space advantage and gradually strangulated his opponent.

Levon Aronian scored a very important victory over Maxim Matlakov that paved his way into the fourth round. As the Armenian GM pointed out in his post-game interview, Maxim committed a blunder with 17.Nh5, most likely missing that after 18.d5 Nb8 19.Rxe5 Nd7 Black’s knight quickly comes back into play. Out of many ways to improve his position Aronian took the most practical and safest approach which eventually yielded dividends.

All other encounters were drawn but for Shakhriyar Mamedyarov (Azerbaijan), Nikita Vitiugov (Russia), Welsey So (USA), Teimour Radjabov (Azerbaijan) and Jan-Krzysztof Duda (Poland) who had won their first games these draws were equal to a victory.  Probably Vitiugov’s task out of these five was the most difficult one as he faced his higher-rated compatriot Sergey Karjakin with black pieces. To Nikita’s credit, he reached the desired outcome in a sharp tactical skirmish on the kingside forcing a perpetual check.

As a side note, Welsey So, Duda, Mamedyarov, and Aronian haven’t yet played a single tiebreak at this World Cup. Since a winner was not determined in the matches Yu Yangyi – Wei Yi, Ding Liren – Firouzja, Svidler – Nisipeanu, Nepomniachtchi – Tomashevsky, Artemiev – Le Quang Liem, Vachier – Lagrave-Jakovenko, Wang Hao – Dominguez, and Giri – Xiong, the opponents will sort things out in a tiebreak on September 18.