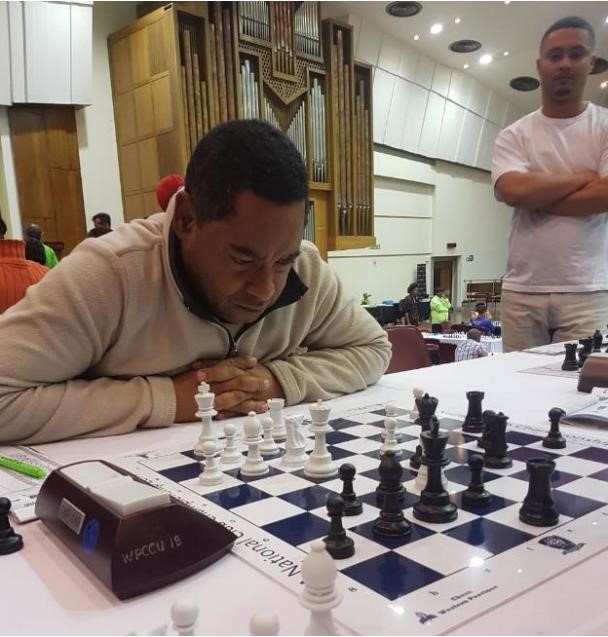 On Saturday 23 September 2017 the last National Club Championship kicked off in Cape Town. At the opening ceremony Advocate Maxwell Solomon was called upon to recite a poem that he had written. The poem was entitled Royal Game and I quote it here:

As pawns and pieces

Humble-looking ( as they are)

The annexing of squares,

The clashing of the pieces,

In this cerebral warfare.

A gentleman’s game, they say

The ebbing away of time: A form of meditation.

The royal game, they call it

All that matters is the initiative :

to a winning advantage-

Capturing all the king’s men,

With the queen mating the king. “

What an entrance it was at the national championship. A fitting poem. Advocate Maxwell Solomon was a South African champion and has represented the country at three Olympiads (1992, 1994 and 2000). He has won multiple WP titles and was part of many match winning WP teams that won the national interunion title. This year he played board two for his club, MRL, who claimed second place at the Chess Western Province chess league.

I enjoy the national club championship. The history of the national club championship is not well known in South Africa. In 1996 I obtained a scholarship from grandmaster Anatoly Karpov to study chess in Sweden for six months. Karpov had visited my alma mater, they University of the Western Cape in 1993 where we met. In 1995 he invited me to study where I stayed for five months. At the Karpov school of chess were many African chess players some of whom completed their high school studies in Sweden.

I played for the local club Fagervik in the AlSvenska which means all Swedish. I played board three for the club. I won my two matches that I played for the club. Upon my return to South Africa I sent a fax (yes, a fax!) to Chessa outlining my idea for a national chess league. Chessa acknowledged the note and only Elsie Steenkamp supported me. I however had to wait until 2003 to start the league.

By this time, I was the Chessa president and was able to galvanise different levels of support. I persuaded Free State to host the event for the first time. We followed the Swedish model which was to play four games the first weekend and then return a few months later to complete the other seven. This however turned out to be an expensive exercise, so we didn’t repeat it in the years following. The clubs championships then found a home in Bloemfontein. the late Richard Morris and the indefatigable Piet Van Zyl loved the event and had great fun organising the event. We played at various schools in the area.

Club chess allows your players to grow. The National Club championship is open to anyone who is registered as a club in their respective union. The event encourages team spirit and allows all clubs with an average rating of more than 1500 to play in the A section with the top clubs. Let’s support the event!

The previous winners were:

In 2003 Centurion led by Johan Steenkamp won the inaugural event when they defeated Steinitz.

In 2004 Steinitz won the event that started a dominance that lasted for some time.

In 2005 Steinitz returned to Bloemfontein to retain their title.

In 2008 the event was held for the first time in Cape Town and Steinitz regained the title when the dramatically defeated Brooklyn four nil in the second last round. Brooklyn has the star-studded cast of IM Mabusela on one. Zitha on two, Mosethle on three and Daniel Mathe on four. Steinitz had Calvin Klaasen, Shabier Bhawoodien, Lyndon Bouah and Craig Willenberg that year.