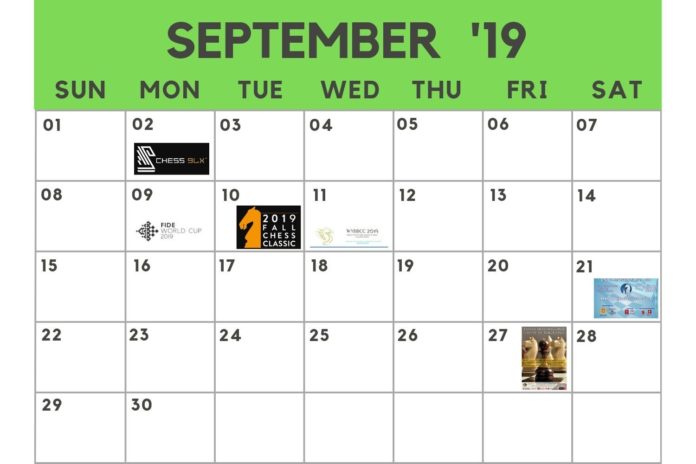 These key tournaments in the yearly calendar will keep chess fans entertained during most of September, as the FIDE World Cup kicks off on the 9th in Khanty-Mansiysk. Before that, Garry Kasparov will face Fabiano Caruana in a Chess960 match-up, while the first leg of the Women’s Grand Prix will start in Moscow almost concurrently with the stellar event of the month.

Using the same format as in 2018, four Chess 960 matches will take place. The event, dubbed Chess 9LX (Roman numerals are in use), will include the presence of none other than living legend Garry Kasparov. The match-ups:

The regulations are the same as last year. Six rapid games at G/30 with a 10-second delay and fourteen blitz games at G/5 with a 5-second delay will decide the winners. Each round will begin with the same starting position on all boards, and new positions will be drawn after every fourth game. The players will be able to prepare for their games, but they are not allowed to use electronic devices.

Two spots at the 2020 Candidates Tournament will be up for grabs at the 128-player single-elimination chess tournament. The highest-rated players in the world will battle against qualifiers from four continents (Africa, America, Asia and Europe) in the gruelling 26-day event.

The matches from round one to round six consists of two classical games with a time control of 90 minutes for 40 moves plus 30 minutes for the rest of the game, with an increment of 30 seconds per move. The finals and the match for the third place consist of four classical games. If the score is tied after the classical games, rapid and, if necessary, blitz tiebreaks will be played the next day.

The 2019/2020 FIDE Women’s Grand Prix series kick-off at the Skolkovo Innovation Centre located within the Mozhayzky District in Moscow, Russia. It will be the first of four twelve-player single round-robin events which will give out two tickets to play in the 2021 Women’s Candidates Tournament.

World champion Ju Wenjun and challenger to the crown Aleksandra Goryachkina will be facing each other in the Russian capital. All twelve participants:

The 2019 Fall Chess Classic is the third of four tournaments each year featuring international chess professionals. The Fall Chess Classic consists of two ten-player round robin tournaments. Over the course of ten days, these competitors will battle for more than $30,000 in prize money and gain valuable experience in top-level events.

The main GM-tournament will feature the following line-up:

The 3rd FIDE World Youth Rapid and Blitz Championships will be held in the conference building of the Hotel Salobreña Suites in Salobreña, Spain, about 100 km away from Malaga. Eleven-round rapid and blitz tournaments will take place in the U-14, U-16 and U-18 categories (open and women’s).

The Nona Gaprindashvili Cup is a nine-round open tournament to be held in Georgia’s capital. The usual FIDE time control for this kind of events will be in use: 90 minutes for 40 moves plus 30 minutes until the end of the game and 30-second increments from move one.

For the first time, the ‘Ciutat de Barcelona’ tournament will be open to all, after having organized a Schveningen match in 2018 and a round-robin from 2004 until 2017. The stellar event of summer in Catalonia will feature two nine-round Swiss events to be played concurrently, with Group B open to those with an Elo rating below 2000. The venue will be the “Espai Bota, Recinte Fabra i Coats”, a historic building of the Sant Andreu district.