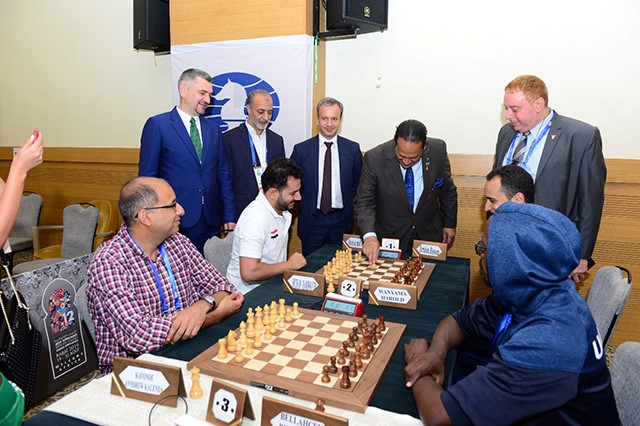 Egypt rules at the African Games Chess Championships, taking home all the Gold medals in dominating fashion. Having already won the Gold in the Teams Championship -played during the first two days of competition- the Egyptians went on to take the top spots also in the individual rapid and blitz events, both in the open and women’s categories.

Ahmed Adly and Bassem Amin swept the competition in the rapid championship, topping the standings without one single loss. Their paths crossed in the 5th round, when they were already the only two players with a perfect score, and they settled for a draw in an uneventful game. Adly would go on to win the remaining four games, getting the Gold, while Amin would concede one more draw -against the local star GM Hicham Hamdouchi- having to content himself with the Silver medal.

Harold Wanyama (UGA) and Hicham Hamdouchi (MAR) finished 2 full points behind the winner and 1½ behind the runner-up, but it was the player from Uganda the one to get away with the medal, thanks to a better tie-break.

The President of the Association of African Sports Confederations, General Ahmed Nasser, visited the tournament during the first day of play and made the opening move in the clash between Ahmed Adly and Bassem Amin.

The Women’s Championship was much harder fought. The top-seeded Shrook Wafa led the competition with firm hand, but a defeat in the last and decisive round allowed the Zambian Lorita Mwango to reach her in the standings. However, the Egyptian WGM had in her favour a much better tie-break, and that was enough to secure the Gold medal. Sabrina Latreche, from Algeria, got the Bronze.

The blitz championship was a one-man show, with an inspired Bassem Amind wiping out the competition, and cruising to a perfect score, 9/9. The five-time African Champion and only African player to ever reach 2700 added a new triumph to his spectacular track record.

The top-seed Ahmed Adly got the silver medal with 7½, losing to the Nigerian Oladapo Adu, and drawing against the MI Mohamed Tissir. Algerian Grandmaster Bilel Bellahcene finished third.


In the Women’s Championship, the Wafa sisters took the two top spots, but not without difficulty. They both suffered a loss, but in general, the only two WGM in the field showed their class to take Gold and Silver. Lina Nassr, from Algeria, scored 7 points that gave her the Bronze.