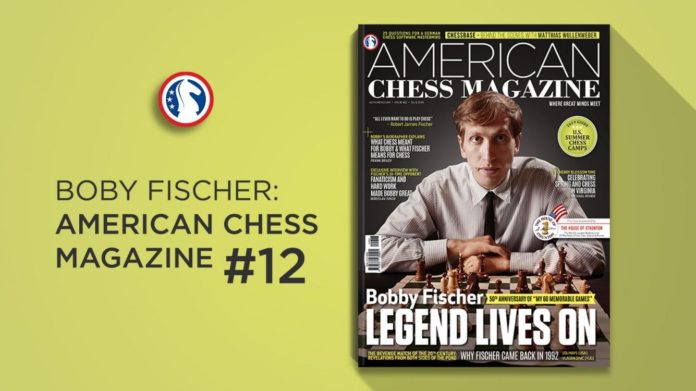 New American Chess Magazine #12 pays due tribute to the legacy of Bobby Fischer due to the 50th anniversary of the publication of My 60 Memorable Games!

In the fall of 1972, Bobby Fischer, newly crowned world chess champion, was the most celebrated person on earth. No American chess player before or since has achieved such a degree of fame and notoriety. Throughout the summer of 1972, Fischer’s pre-match hysterics, antics, and demands made headlines all over the world. When he took the crown from the Soviet chess machine, the mass publicity that ensued prompted new chess players to sprout up all over the globe. Everywhere you looked, it was chess, chess, and more chess. New members flooded the United States Chess Federation. The Fischer era had begun.

Or had it? Shortly after the match, Bobby Fischer, to the shock and dismay of chess fans, disappeared from public view for almost twenty years.

In this issue, Fischer’s biographer Dr. Frank Brady recalls episodes from his personal encounters and experiences with the American former World Champion and explains what chess meant to Fischer and what Fischer means to chess. Following Dr. Brady’s article, readers are invited to look at two authentic testimonials by Lou Hays (USA) and Vladan Dinic (Serbia), who provide first-hand accounts of how Fischer was lured back to chess – and, we might say, also the world at large. After twenty years in isolation, in 1992 Bobby re-emerged from obscurity to play “the Revenge Match of the 20th century” against Spassky in Yugoslavia. Even for readers who are already very knowledgeable about Fischer, these two articles, from both sides of the pond, are warmly recommended as they reveal many little-known facts about his life.

In an exclusive interview for ACM, the legendary GM Borislav Ivkov – a live witness of the “Fischer era”, shares his personal memories of Bobby Fischer, putting the record straight on what Bobby really said and whether he really invented random chess.

Fischer’s chess legacy is then examined by our regular contributors – GM John Burke presents Bobby’s favorite openings, IM Boroljub Zlatanovic casts light on Fischer’s strategic decisions and GM Alex Fishbein dissects Fischer’s endgame mastery, boldly concluding that “modern chess begins with the eleventh world champion, and that applies to the endgame as much as to anything else.”

GM Joel Benjamin entered his first chess tournament in December of 1972 and fondly remembers the “Fischer Boom” and the impact it had on American chess, which in turn resulted in the rise of a whole new generation of later-to-be grandmasters.

Pete Tamburro and Carsten Hansen give their respective views on the best books written on Fischer, and Pete also challenges readers to find the winning moves from a selection of Bobby’s tactical brilliancies.

The ability to calculate precisely is one of the top requirements in modern chess and GM Susan Polgar offers some precious advice on how to cultivate this skill with the help of annotated games from her own rich chess career, and concluding with two test positions. Meanwhile, in his regular “All-Round Training” column, GM Jacob Aagaard presents fresh and testing examples to help improve your chess decision-making skills.

The summer school break is a time when youngsters are offered plenty of choice in terms of attending a chess camp. Our Features Editor, Vjekoslav Nemec, carried out research to help make it easier for parents to decide what is best for their kids. We hope you’ll find enough useful information here to get the most of the opportunities on offer.

Present-day chess can hardly ignore the use of chess software, large databases, online playing platforms, etc. But, who are the engineers behind all these essential utilities and what challenges do they constantly face? Well, there can be no better person to unravel the mysteries than our special guest Matthias Wullenweber, Mastermind of ChessBase, who shares his views on the past, present and future of chess programming and its importance for the world of chess.

We haven’t forgotten the local stories and are happy to showcase a truly traditional tournament in Virginia, as each year it celebrates both spring and chess under the proud banner of the Cherry Blossom Classic!