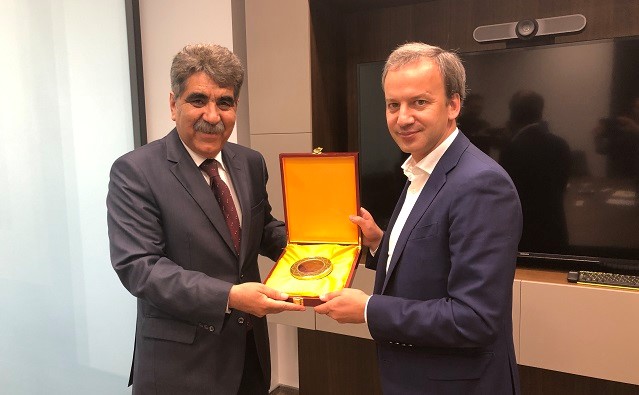 On July 23rd, FIDE President Arkady Dvorkovich met with Dr. Latif Bahand, Ambassador Extraordinary and Plenipotentiary of the Islamic Republic of Afghanistan to the Russian Federation. A thorough dialogue took place on how to strengthen cooperation between FIDE and this Asian country. At present, there are about 1800 registered players in 34 provinces of Afghanistan, including 5 FM, 6 CM players, although, according to unofficial data, the total number of chess fans reaches 10000.

It was noted that the first Trainers’ and Arbiters’ seminars will be organized on August 1-3 in Kabul. This was made possible thanks to FIDE financial assistance through projects of the Global Strategy Commission.

August 21st marks 100 years’ anniversary since the independence of Afghanistan was declared. Also this year will mark the centenary of the establishment of diplomatic relations between Russia and Afghanistan. In this regard, the FIDE President proposed to organize a match between the young chess players of the two countries. Also the issue of Afghan youth referral to study chess specialization in the Russian universities and other aspects of bilateral cooperation were discussed. Arkady Dvorkovich stressed that FIDE is ready to sign an agreement with the national federation of the Islamic Republic of Afghanistan on the above areas of cooperation.

Berik Balgabaev, Advisor to FIDE President, Mr. Mohtaat Homayoun, Minister Counselor of the Embassy of Afghanistan, and Mr. Ajmal Mangal took part in the conversation. By the way, before arriving in Moscow, Mr. Khomayun was a technical adviser to the Afghanistan Сhess Federation. Ambassador Latif Bahand is a great connoisseur and translator of Russian poetry and literature.