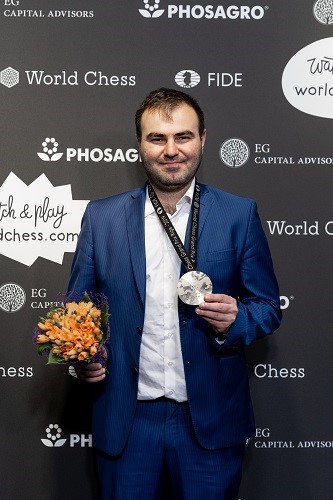 And the moment we have all been waiting for…….

Shakhriyar Mamedyarov stands as the winner of the FIDE Grand Prix in Riga. He beats Maxime Vachier-Lagrave in a nerve-wracking tie-break thanks to a win in the last Armaggedon game. With this victory in the second leg of the Grand Prix Series, he earns 24,000 euros and shares the lead with Alexander Grischuk in the overall standing with 10 points.

Shakhriyar Mammadyarov is an Azerbaijani chess grandmaster. He is ranked as No. 1 in Azerbaijan and No. 8 in the world as of July 2019. His personal best rating of 2820 makes him the sixth-highest-rated player of all time in chess history.

After two weeks of captivating chess in the National Library of Latvia, both finalists sat for the last day of tie-break games on the stage of the Ziedonis Hall. The drawing of colors resulted in Shakhriyar Mamedyarov starting with the white pieces. As sometimes happens in matches, the players embarked on an opening debate by repeating the same variation as in their previous game. The Azeri decided to check Vachier-Lagrave’s homework by playing the same idea which had brought him success two days earlier. The verdict came instantly, as the Frenchman played an early 9…c5 and 10…Nc6 to put immediate pressure against the pawn d4. The game developed favorably for Black, but Vachier-Lagrave eventually accepted his opponent’s draw offer on move 23. He apparently underestimated his chances, as subsequent analysis showed that he would have had good reasons to play on.

The second game featured the same Italian game as in the classical encounter on Tuesday. Vachier-Lagrave did not wait for his opponent’s improvement and deviated himself with 8.Nbd2. The opening proceeded quietly and Mamedyarov equalized. After the exchange of queens on move 23, the Frenchman showed very inspired play with the pawn sacrifice 27.h4, followed by the advance of the f-pawn. The position remained objectively equal, but the pressure shifted on Mamedyarov’s shoulders. Despite a long thought, he failed to react correctly and erred with 30…Nd7. Feeling the closeness of victory, Vachier-Lagrave possibly got nervous and missed two ways to reach a winning endgame. After the weak 34.Bd3, the balance was restored and the Azeri saved the draw.

Colors alternated again for the next set of rapid games, played with a shorter time control of 10 minutes for each player, with an increment of 10 seconds per move. Mamedyarov went for the same line against Vachier-Lagrave’s Grunfeld. Without a doubt, the opening debate went beyond the frame of the playing hall, as both teams of trainers had worked out the nuances of this variation during the course of the first tie-break game. As it turned out, Mamedyarov deviated with 14.Re1, but Vachier-Lagrave reacted instantly with the astute f5. The game remained balanced throughout and ended in a draw.

So far, the dynamic of the match clearly showed domination by the Frenchman, but the following game marked a change. Vachier-Lagrave misplayed an opening advantage in yet another Italian and suddenly put his castle in danger with the risky 16.g4. After maneuvering his knights around the white king, Mamedyarov could have exploited its vulnerability by pushing h5. But he preferred securing a draw by giving perpetual check.

The Italian Opening stood again on the menu of the first blitz game. The fight remained balanced for a long time until Vachier-Lagrave surrendered the only open file. Mamedyarov piled up his heavy pieces, entered the white position and finished off with a mating attack. Needing a win with black in the second blitz, the Frenchman went all-in and chose a risky opening he had never tried before. This gamble paid off wonderfully. Vachier-Lagrave blitzed out his moves to gain a significant advantage on the clock, outplayed Mamedyarov in the middle-game and won a pawn. His endgame technique was far from perfect, but Mamedyarov was simply too low on time to hold the draw.

It all came down to an ultimate Armaggedon blitz, where White has 5 minutes against Black’s 4 minutes but needs to win the game to clinch the match. Vachier-Lagrave drew the white pieces and decided to refrain from his usual 1.e4 to play in a less forcing way. This strategy backfired, as he quickly caught up Mamedyarov on the clock and failed to put pressure on his opponent’s position. On the contrary, Black took over the initiative and never risked losing. With a few seconds left on the clock and a bad position, Vachier-Lagrave admitted defeat.

The Closing Ceremony took place shortly after the games were over, and was attended by Anastasia Sorokina, FIDE Vice President, and Dana Reizniece-Ozola, Vice President of the European Chess Union – as well as Grandmaster. During his intervention, Shakhriyar Mamedyarov thanked all who contributed to making this beautiful event happen in Riga. He felt particularly happy to win a tournament again after almost a year of low performance. He said that this final had been incredibly hard and congratulated Maxime Vachier-Lagrave on his amazing play during the past two weeks.

This victory in Riga nets Mamedyarov 24,000 euros and propels him to the shared lead in the FIDE Grand Prix Series. He and the Russian Alexander Grischuk total 10 points from the two events they took part in. Maxime Vachier-Lagrave earned 14,000 euros in Riga and is also in good shape in the Grand Prix race, as he occupies the fourth place with 8 points just behind Ian Nepomniachtchi from Russia. It must be noted that these two players will be able to gain points from the last two Grand Prix events in Hamburg and Tel Aviv, unlike Mamedyarov and Grischuk who will take part in only one of these. At the end of the four Grand Prix tournaments in December, the best two finishers will qualify to next year’s Candidates Tournament. The winner of that event will become the challenger of Magnus Carlsen in the 2020 World Championship match.