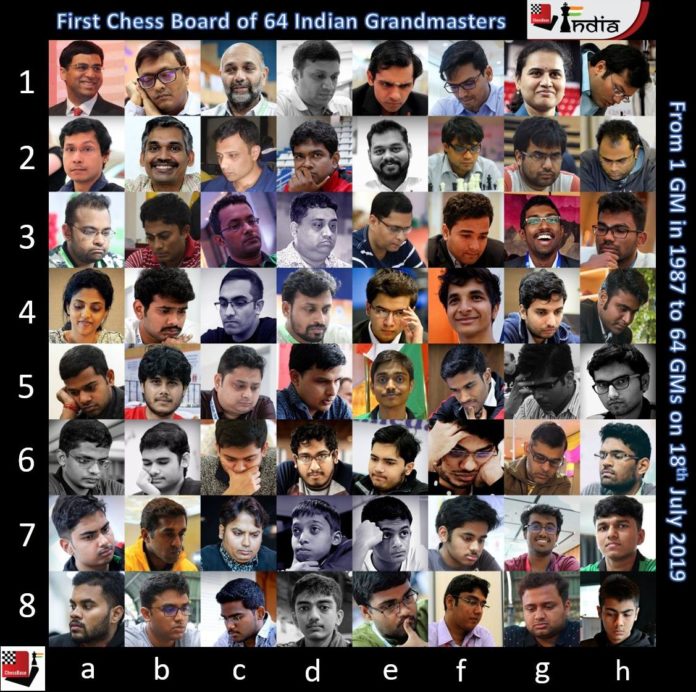 On 18th of July, Indian chess got its 64th GM. A very symbolic day as the chessboard is made up of 64 squares. In 1980s, a genius named Vishy Anand arrived on the chess scene and changed the landscape of Indian chess forever. Anand became a GM in 1987 and 32 years later Prithu Gupta from Delhi became the 64th GM on 18th of July 2019. Who are these grandmasters of Indian chess? In this article, we acquaint you with all the GMs of Indian chess along with their photographs and the year in which they became GMs. Also, we have collected some important statistics related to the grandmasters in Indian chess, which show us what needs to be done to make Indian chess even better.

Chess in India is booming thanks to many factors. The main one being the presence of Vishy Anand, who is still actively playing chess and has motivated the entire nation by becoming the World Champion for a record five times. At the same time, we have a strong national federation, work that is being done at the grass-root level and the chess in schools program that is slowly picking up pace. All of these factors have led to Indian chess going from one GM in 1987 (Vishy Anand) to 64 GMs as on 18th of July 2019. As a chessboard has 64 squares, we thought it would be a good time to have a look at all the GMs of Indian chess and the year in which they became grandmasters. But before that, let’s have a look at some of the statistics.:

Guess who made Indian’s 64th grandmaster? See in the next post