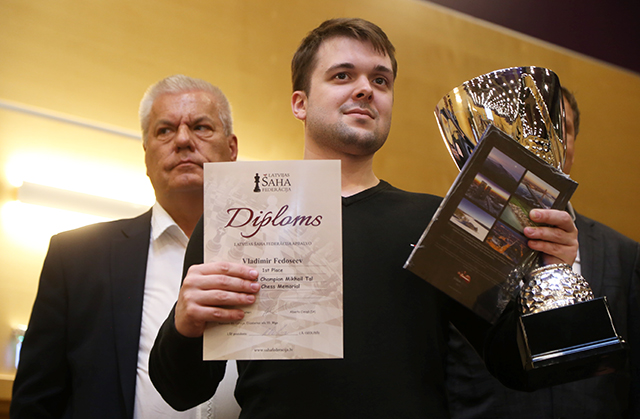 The Tal Memorial was organised to celebrate Mikhail Tal (1936-1992), the 8th World Chess Champion, who was born and lived in Riga. Tal is to this day considered as one of the most brilliant and creative chess-players in the history of the game. Thanks to his original approach to the game and aggressive attacking style he was called “the Magician from Riga”.

The event gathered almost 300 players from 25 countries as well as an impressive amount of 55 grandmasters. As Aris Ozolins, the President of Latvian Chess Federation proudly mentioned during the press conference – this was the first-ever event in Latvia with so many grandmasters participating. All players had 15 minutes for the game plus 5 seconds for every move played. The total prize fund of the tournaments is EUR 35 000, EUR 25 000 for the rapid chess tournament and 10 000 for the blitz tournament. Entry is free of charge for the spectators.

First six rounds of the Tal Memorial were held on Tuesday and this day was dominated by Miguel Munoz from Spain, who won all of the games, becoming a sole leader. There was a big group of strong players ready to use his mistakes – a group of five players with 5.5 points and even more with 5 points, among them the Latvian players Kovalenko and Nikita Meshkov.

In the decisive phase of the tournament on Wednesday, Vladimir Fedoseev from Russia, who was the strongest among all players and has not lost a single game among 273 players in 11 rounds, scored 8 wins and drew three games, overall collecting 9.5 points. It was a deserved win for Fedoseev who played an impressive tournament, winning every game. The Russian grandmaster was really happy and in the interview, after the closing ceremony, he admitted that this was a really important victory for him because this has been a really tough year for him and the results have not met his expectations.

The 2nd place with 9 points was taken by the Czech grandmaster David Navara. Navara participated in the prestigious Grand Prix knock-out event at the Latvian National Library but lost in the first round and decided to enter the rapid chess memorial. The organisers and the chess fans were really pleased with that because the Czech player is a true genius of chess and a true fighter. Places 3 to 9 were shared among the players with 8.5 points. The player with the best tie-break and the winner of the 3rd place was the talented young player from Germany, Rasmus Svane, who seemed to be very surprised with his great success himself. The Latvian top player Kovalyenko also gathered 8.5 points. The important victory in the last round over the Romanian player Constantin Lupulescu ensured him the 5th place.

The top female player was Alisa Galliamova, the former runner-up at the Women’s World Chess Championship and the bronze medalist of the European Women Chess Championship 2017, which were held in Riga as well. The second women prize was won by the 9th time Latvian Women Champion Laura Rogule and the third place went to Inna Gaponenko.