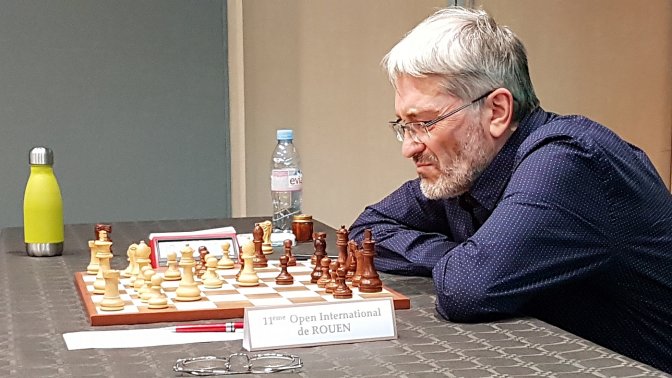 Igors Rausis is a Latvian-Czech chess player. Awarded the title Grandmaster by FIDE in 1992, he was Latvian champion in 1995. From 2003 to 2007 he represented Bangladeshand since 2007 he plays for the Czech Republic. Rausis is the oldest player ranked among FIDE’s top 100 players.

GM Igors Rausis is under investigation for cheating after he was caught with his phone during a game at the Strasbourg Open. The 58-year-old Latvian-Czech grandmaster had raised suspicions after he increased his rating in recent years to almost 2700.

During an open tournament July 10-14 in Strasbourg, France, a phone was found in a toilet that had just been used by Rausis. He later signed a declaration that the phone was his.

Whether he was using his phone to get assistance from a chess engine is not clear at the moment.

I simply lost my mind yesterday. I confirmed the fact of using my phone during the game by written [statement]. What could I say more? Yes, I was tired after the morning game and all the Facebook activity of accusers also have a known impact. At least what I committed yesterday is a good lesson, not for me—I played my last game of chess already.

FIDE’s Fair Play Commission Secretary Yuri Garrett told Chess.com that Rausis voluntarily withdrew from the tournament. This however contradicts a Facebook post written in Russian by FIDE Director General Emil Sutovsky, who said Rausis was “suspended” from the tournament. According to Sutovsky, Rausis had been under suspicion for a long time. He also mentioned that the FIDE Ethics Commission will now deal with the case, and even the French police were involved.

The case of Rausis is similar to that of a Georgian grandmaster who got banned from a tournament in 2015 after his phone was found in a toilet. In that case, it was discovered that he had been analyzing his position with a chess engine. He was banned for three years and lost his GM title.