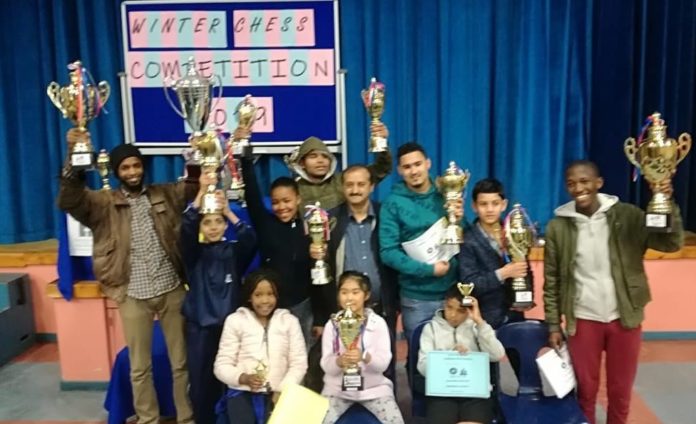 The Western Cape hosted a series of chess events over the last three weeks. The Elsies River Open was hosted by Elsies River chess club. The club was formed in 1979 and its first league match was against Steinitz Chess Club!

The event attracted a fair number of players with defending champion Craig Willenberg defending his title. He started very well when he beat FM Calvin Klaasen, the co SA Closed Champion. FM Klaasen however put the loss behind him and continued to play good chess. He ended the event with 5/6 winning the event by 0.5 points after Craig lost to Rueben Salimu and drew with Jacques Basson from the West Coast. This is an important lesson for many players. Players sometimes get so upset at losing a game that they do not put in their best effort in the following rounds! Klaasen however decided to just continue playing and he won at the end.

On Thursday 27 June 2019 the Friends of Ryland Library hosted an event. The Argus newspaper reported on the event and noted that it was being held for the fifth time. The annual event is part of the holiday programme of the library. Players came from as far afield as Grabouw and Napier to participate. The head Librarian, Ms Zureena Moosa, said in the Argus newspaper that the Chess Winter Slam was a huge success and the friends of the Rylands Library felt proud that so many players came to play from over the Western Cape. Abduraghiem Salem from Cape Peninsula University of Technology took first place ahead of such notables as FM Shabier Bhawoodien and Cherwin Kleinschmidt. Kareena Li, 7, won the category for the youngest player.

This is the Keegan’s third event in June, and he has twice ended as winner and now as runner-up! Welcome back Sir! Keegan is poised to upset the Klaasen and Kobese duo who have shared all the Cape Town events over the last few months!

Terry Quirk from Eden chess reports that Claude Van Heerden from Alekhine Chess Club in Nelson Mandela Bay won the 2019 Knysna Open. Claude turned 50 on 23 June and this tournament victory was a good birthday present for him! Terry sent this report:

Other prize winners were:

Thanks go to sponsors: A) DCAS provided much needed clocks plus transport and medals. B) Eden Chess Union supplied additional transport and snacks for lunch time plus entry fee for some players.

We were also very grateful to Knysna High School for the use of their Hall.

The Blackjacks Chess Club hosted their annual club championship last week. Mr. Louw, the Chess Western Province vice president, sent us a note and some pics! Well done Blackjacks. They are completing their club championships and registered the event on http://chess-results.com/tnr451899.aspx?lan=1. Mr. Louw sent us a short note:

Round 1 of our Club Champs with Cherwin Kleinsmidt playing on board 1.

Also present for round 1 was Taylon Blankenberg and Nicole Lott who is currently playing in the winter games in Durban representing their Province.

The tournament will see allot of juniors from surrounding Elsies River and Ravensmead play with some of the regular Blackjack Players making for an exciting and tough Club Champs.

The oldest club in South Africa, and second oldest in the Southern Hemisphere, Cape Town Chess Club is busy completing their club championship this coming week. Reuben Salimu however has already won the event. Although he plays for a different club, Cape Town opened their club championship up to players from different clubs. The results can be seen on http://chess-results.com/tnr438295.aspx?lan=1&art=1