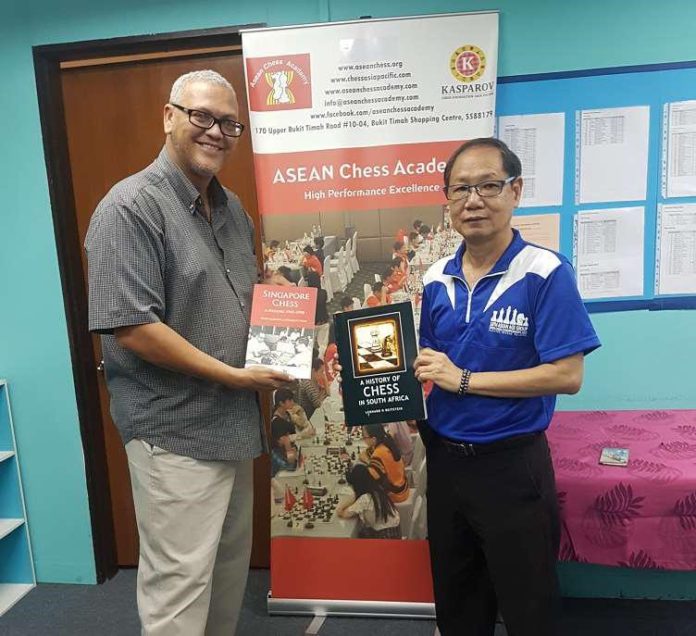 In November 2018 I visited Singapore. I was initially there for work purposes and stayed on for a few extra days. The Carlsen Caruana match was on that time so my interest was of course piqued when I picked up the New York Times of 24 and 25 November 2018. Just below the headline article was a smaller article that described ‘ How Chess conquered Norway.’ The article by Andrew Keh tells the reader about a recent Friday night in a pub in Oslo, Norway. He describes the place as having a considerable buzz with candlelight illuminating framed artwork on the walls, conversation humming over the clink of beer glasses- except for one small detail: the chess happening at every table and countertop.

After my work duties were concluded I set out to visit Mr Ignatius Leong. Ignatius has been a pillar of Singapore, Asian and world chess for the last three decades. I first met Ignatius in 2002 in Kuala Lumpur when he was the organiser of the World under 16 Olympiad and I was the coach of the SA Team. He always had a kind word and was very approachable. We had agreed to meet as I wanted to know more about chess in Singapore. Ignatius was a former General Secretary of FIDE and has been involved in chess for the last three decades.

We met at the Asian Chess Academy where he agreed to have an interview with me. After showing me around we sat down. Ignatius noted that South Africa should compare itself with Iran, Mongolia and Vietnam from 1990. We need to look at those countries and determine what they did to uplift their chess. They were also not really participating at world level but today the world junior champion is from Iran, Vietnam has many grandmasters and Mongolia has re -entered the world of chess. I made a mental note that I will follow up on this interesting aspect. I pointed out to him that we stopped playing at Olympiads in 1974 and started again in 1992. In fact we rejoined FIDE on 22 June 1992 together with all the former Soviet republics like Armenia, Georgia, Ukraine etc. so quite exalted company for a country like South Africa.

Ignatius stated that organisers and countries should not simply organise events because they want to. There must be clear reasons for organising an event, the reasons must be clear and the objectives must have synergy with the vision and policy of the organisation. The policy prevailing must be coherent and must enable chess to grow and expand. In many organisations whether it be at club, district, provincial or national level chess players are reluctant to change policy. They prefer being in comfort zones and do not easily change or want to change.

Ignatius always use to take it personally when people didn’t want to change policies when he made proposals. He has however realised that when people do not accept the amended changes then it means that you as the proposer did not do enough to get them to agree. Your policies must be well reasoned, and must speak to issues at hand. Chess evolves and does not always need a revolution but can evolve. (This conversation reminded me of a conversation that I had at my chess club Steinitz when we were asked the question “how will the club grow organically?)

We discussed the fact that the Carlsen Caruana match thus far had only draws at that stage. Perhaps a radical proposal would be for chess that no draws be allowed and that perhaps we should as chess organisers think about the sponsors. Chess is of course difficult to sell and what we should be considering is sporttainment. Chess should be part of the entertainment that people want to see with sport. So if there is a draw, players should continue with perhaps different time controls until there is a result.

Ignatius drew parallels with Chinese Chess where you always get a result. I mentioned to him that my friend Lourenzo Van Niekerk has also introduced this type of competition in Cape Town where draws are not allowed and that the player introducing three fold repetitions must break it. Perhaps we should experiment more with this? Perhaps the offer of a draw should not be allowed. Has chess become computer based where the game is played up to preparation stage and then peters out to a draw at the top level. Chess has always evolved. Ignatius pointed out that the queen only became more powerful about 500 years ago. Prior to that the queen didn’t have real power!

In order to bring Singapore chess to a higher level he brought two Chinese coaches to Singapore in the nineties. These players assisted with the development of chess. He wanted chess players to see that chess training was not a hobby but a real job. As his coaching developed there were approximately 37 coaches at the academy Ignatius started. He introduced a common lesson plan and syllabus that should be followed. Later on Ignatius also made proposals to FIDE which was accepted

at the FIDE Trainers committee.

We then proceeded to his apartment where he showed me the fascinating chess sets and chess paraphernalia that he has accumulated over the years. Each trinket and artefact told its own story. I was of course most fascinated by the chess sets as they all told a story! After each chess set we unpacked Ignatius would tell me a bit about the chess set and country of origin. The first chess set we unpacked has features on the white squares which were very fascinating to behold.

The second chess set intrigued me. A Classical Chinese chess set the rooks were made from the traditional Chinese houses that you always associate with China. All the pieces were shaped with Chinese features and the pawns reminded me of the Terracota warriors. I was quite taken with this chess set. Ignatius reminded me of a book that was written about Chinese chess published about a decade ago. (I remembered that I bought a copy but one of my chess friends borrowed the book permanently! In other words I don’t know who has it and the person who borrowed it is also silent. An impasse, stalemate! Fortunately my wife had her own copy of this book so I was able to read it when I got back to Cape Town.)

The third chess set that he had was a Greek chess set in which Greek soldiers and Greek warriors were portrayed. We didn’t pack out the chess set because we couldn’t find the board!

The final set was also a Chinese set. Ignatius informed me that the chess set portrayed various Chinese fairy tales in the pieces. So each chess set had its own story to tell. We then looked at a

chess set which had the signature of Grandmaster Zhu Chen which was signed when she was Women’s world champion. A very beautiful chess set.

The final two sets were from Thailand and Cambodia. Ignatius explained to me that in these games the pieces moved differently from Western Chess and that chess has always developed separately in these countries for many centuries. The elephant was also an important piece in some countries and they had their own rules. I did not know about these games and upon further research found it very interesting.

I thanked Ignatius for the time he spent with me that afternoon. I learnt a lot about chess administration and I was also looking forward to reading the book that he had presented met we had exchanged books at his chess academy. The book he presented to me was on the History of Singapore Chess between 1945-1990 and I presented a history of Chess in South Africa written by Leonard Rietstein. I look forward to reading the book in the new year. He also presented me with a Chinese set which now stands proudly in Cape Town. Thank you Ignatius!