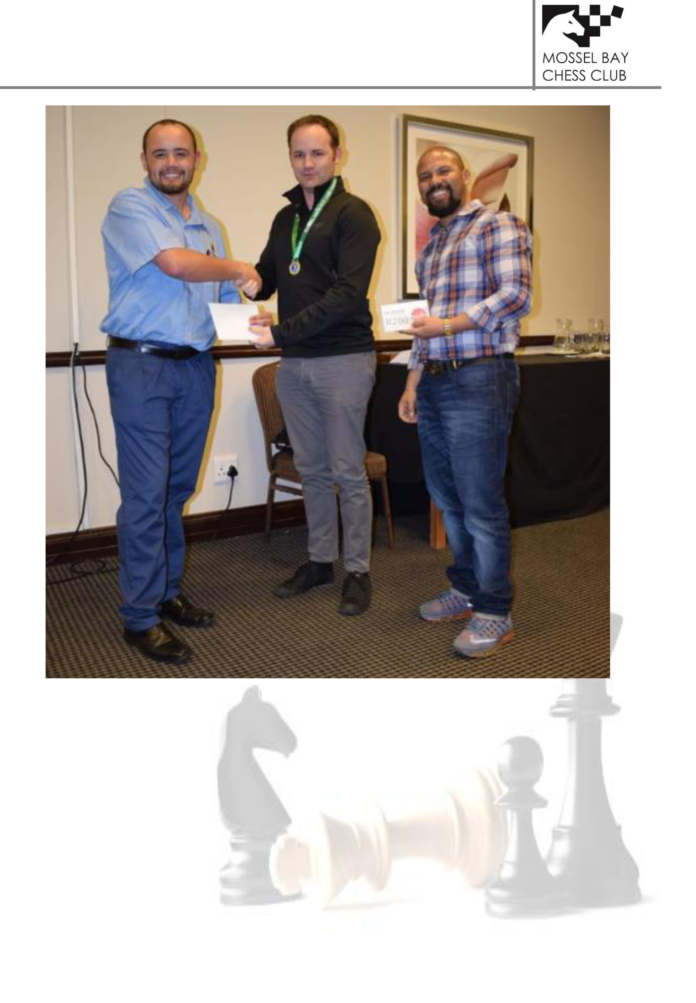 The annual Mossel Bay Sports & Recreation Festival kicked off on 15 September 2018 until 14 October 2018 and as usual there is a real buzz about the town during this time. The Festival is one of the biggest sporting events in the country and offers a variety of activities over the course of a few weeks. The Festival is one of many events organised by the Mossel Bay Municipality with the aim to, among other, uplift the communities, encourage and promote a healthy lifestyle as well as to boost tourism and the local economy.

Every year the Mossel Bay Chess Club uses this opportunity to host their annual Mossel Bay Open chess tournament. The Mossel Bay Chess Club (MBCC) was established in the late 1990’s by the passion of two chess fanatics, namely, Lorenzo Van Niekerk and Chakati Botha. Lorenzo came from Cape Town and Chakati was a resident from Mossel Bay. They decided to name the club “The Tal Chess Club” since they liked the chess playing style of the great chess master. Practices were held at the Sao Bras Secondary School and occasionally at the home of Lorenzo. Earlier tournaments were well supported by the Western Province clubs and it included a tournament at Dana Bay which was attended by well-known names such as the Willenburgs and the Solomons.

After Lorenzo left Mossel Bay, Henry Willemse took up the leadership of the chess Club. Under his supervision the club hosted various tournaments at the Old Power station at Santos Beach. The club grew and became affiliated to the Mossel Bay Sports council and the SWD Sports Organization (Eden Chess Union). During the year 2013 the constitution was drafted and the club was renamed the Mossel Bay Chess Club. The club grew in numbers and was granted opportunities to compete in tournaments in the surrounding areas through the help of the Club Development Programme sponsored by DCAS. The coming of Bjorn October, the club’s treasurer and an employee at the Mossel Bay Municipality also act as liaison and strengthened the relationship between the club and the Municipality. The next stage of the development of the club allowed the club to grow even more. Ralph Cloete took up the reins as chairperson in 2014 and under his leadership the club became the most dominant player in the Eden Chess League, now champions four years in succession.

The first Mossel Bay Open Chess Tournament hosted in association with the Mossel Bay Municipality, as part of the annual Mossel Bay Sports Festival, was held during the first weekend of October 2013. It started off small with two sections namely senior and school sections which was held at the Old Power station at Santos Beach. As from 2014 we secured the Garden Court Hotel conference room (Garden Route Casino) as our main venue for hosting the Mossel Bay Open. The tournament attracted strong players from the Eastern Cape, like Freddy Odendaal and the late Bertram Madatt. The South African veteran, Deon Pick from the Boland also graced the podium with his presence more than once. The tournament now consists of three sections and is growing in popularity and is attracting more and more players every year. The most recent 1st place winner of the A-section of the tournament is Warrick Erlank. Previous winners include, Freddy Odendaal, Corne Naude, George Lawerlot and the late Bertram Madatt.

The club work closely with the local schools via Henry Willemse and Morne Matthee and manages to promote chess amongst the youngster and to create a strong chess culture here in Mossel Bay. Most of these youngsters part take every year in the Mossel Bay Open. The lady who did the catering for the event was offered to use this opportunity as a fundraiser for her son to attend the SAJCC in Boksburg at the end of the year.

The club’s goal is to grow the Mossel Bay Open into one of the biggest events on the South African Chess calendar in order to promote chess and strengthen the chess culture in the Garden Route area.

The results are as follows:

The C-section was contested by 16 players. After tense competition over the two days, Sachin Kruger won this section followed by Bradley Baadtjies who came a close second and Arno Du Plessis third. Gabriela Jansen walked away with the Best Girl award.

The B-Section was contested by 34 players. The fiercely contested competition was again evident where the top players fought it out. Grant Campbell walked away with the first prize, followed by Petrus Bosman in second and Cailynn Jones in third. Cailynn also took the Best Girl award for this section.

The A-Section was contested 32 players. We reached our highest average rating ever in this section. The top two places were hotly disputed by the two highest rated players, but Warrick Erlank came out on top after he drew his game against Freddy Odendaal. George Lawerlot achieved third place and Amy-Leigh Gibson was awarded Best Girl for the A-section.

Warrick Erlank winner of A section

The Mossel Bay Chess Club wants to thank all its sponsors who helped make this event a success. The Club gave away a luxurious stay for four at the prestigious Wolwedans Game farm situated just outside Mossel Bay as 1st prize in the A-section. De Jagers clothing store sponsored clothing vouchers to the top 10 players in each section and the Club gave away lots of cash prizes and medals. The best girl out of each section was rewarded with a voucher and a medal. The Garden Court Hotel offered a discounted rate for the players and their parents. The Mossel Bay Municipality organised the venue and the coffee and the Eden Chess Union paid for the catering. The Club also wishes to thank the Chief Arbiter George Swart and his family for doing such an excellent job.