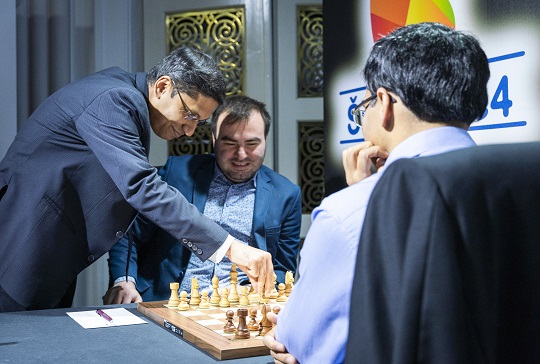 The only decisive result of the day was not indicative of the fighting spirit across the board. Magnus Carlsen remained in the lead after splitting the point with his long time rival, former world number two, Levon Aronian. Wesley So remains half a point behind in clear second place after surviving the storm against former leader of the tournament, Ian Nepomniachtchi. The penultimate round can decide the tournament as Carlsen and So will be facing off. The American is in a must win position and will have the white pieces. A win for Carlsen will clinch the tournament with a round to spare.

Commentator Alejandro Ramirez called this game one of the best draws he’d seen in a long time. In the clash of the titans, Carlsen came to the game armed with another new idea in the Vienna Variation of the Ragozin Defense, playing a novelty on move 15. The World Champion found an interesting rook maneuver, the staircase to heaven as Yasser Seirawan called it, transferring his rook from h1 to f6. The high level game was computer-like, with both players finding the most precise move at critical moments. Carlsen was frustrated to not have found a critical blow, but it simply didn’t exist as his advantage was only optical. The game eventually petered out into a drawn rook endgame.

Ian Nepomniachtchi vs Wesley So ½ – ½

“Wesley is pulling a Nepo against Nepo,” as Maurice Ashley described So’s escape, referring to Nepomniachtchi’s own survival skills that he displayed in previous rounds. Nepomniachtchi repeated the same line in the anti Berlin Nakamura tried against Vachier-Lagrave in round seven. The American thought he had a fine position, but slowly found himself in a worse position after not trading queens. After Nepomniachtchi’s dangerous passed pawn reached the sixth rank, So tried a desperado, trying to set up a perpetual. The natural looking move would have sealed the deal for Nepomniachtchi, but instead he fell for his opponent’s trap and actually walked into a perpetual. The American wasn’t happy about his level of play but was relieved to have escaped with the half a point.

Ian Nepomniachtchi and Wesley So

Caruana was quite critical of the level of the play overall, but of his in this tournament particularly. Ding Liren played a new idea in the Anti-Marshall variation of the Ruy Lopez and a complicated battle ensued. The Chinese player had the pair of bishops against the pair of knights in a closed position. After long maneuvers, Ding traded off his light squared bishop for a knight, while also picking up a pawn. The resulting position was such that all of Ding’s pawns were on dark squares, rendering his dark squared bishop useless. The Chinese player sacrificed a pawn in order to open the position, but his decision resulted in too many pawn exchanges, where his extra material was no longer relevant. Caruana found an easy perpetual in the queen endgame.

The Azeri star has been suffering in this tournament but was able to bounce back from a bad streak with a beautiful win. Mamedyarov’s opening choices have been quite shaky in Croatia, but in this round he had a pleasant position with the bishop pair and centralized pieces. On move 27, he played an exchange sacrifice reminiscent of the one Anand himself played against Kasparov in 1995. The former World Champion had defensive resources in the position but with little time on the clock, he failed to find a very difficult geometric drawing pattern, blundering instead. Mamedyarov had no difficulties converting.

Anish Giri secured a comfortable draw with the black pieces. He explained that Karjakin must have been surprised in the opening because otherwise he would have put more pressure with the white pieces. Giri employed the main line Queen’s Gambit instead of the Ragozin Defense, which he has been playing lately. The Dutchman pointed out that 1.d4 is not Karjakin’s pet line and did not have big ideas when faced with a line he was not ready for. Giri deviated from his game against Mamedyarov from earlier this year on move 12. Karjakin did not find a way to challenge his opponent and by move 25, they reached an opposite colored bishop endgame with queens. The game ended in a perpetual several moves later. Afterwards, Giri joined the commentary with Maurice Ashley and offered his insight on the ongoing games.

Vachier-Lagrave essayed the Najdorf but Nakamura steered clear of theory with 3.Bb5+, a common way to avoid theoretical discussions. The resulting position resembled more of an English Opening rather than a Najdorf. The game was balanced throughout with each player having the same number of pawn weaknesses. Once Nakamura exchanged his isolated “c” pawn of his opponent’s weak “d” pawn, a series of piece exchanges ensued, leading to a queen endgame. Nakamura had an outside passed pawn but could not escape the perpetual check.