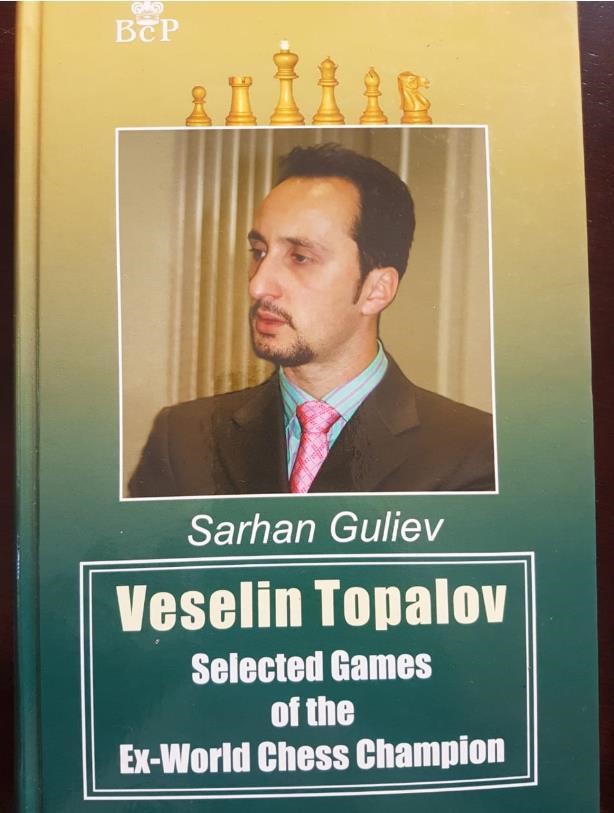 I recently completed the book Veselin Topalov ‘ Selected games of the ex-World Chess Champion’ by Sarhan Guliev (Russian chess house, 2017). The blurb at the back states “

Veselin Topalov is one the best known names in global chess. One of the world’s top grandmasters, ex- Fide World champion has been a stable feature of elite chess for many years. His dynamic, uncompromising style has gained him the adulation of countless fans among both amateurs and professional grandmasters, including the author of the book.

Azeri Grandmaster Sarhan Guliev has spent several years analysing Veselin’s games, which promoted the idea of putting together this collection of his favourites. This book has been approved by the man himself, grandmaster Topalov, who has written a kindly foreword. It will without doubt be useful to a wide range of chess lovers.”

The book has ninety top level games and has altogether 466 pages. This is a mammoth book and was a huge undertaking by the author; I thoroughly enjoyed his uncompromising style of play. Many games are well known but the analysis is top notch and is peppered with nuances that may be lost to the ordinary player if not explained by the author.

Silvio Danailov (for many his years Topalov’s coach, manager and second) offered the following advice how to improve;

The author Guliev also highlights the following in his estimation;

I have seen this in the games that I have analysed over this holiday period. The book took me about three months to finish as I thoroughly enjoyed playing through it. Danailov has made some superb comments for consideration. Of course not everyone that is not professional has 5-6 hours. However each of us should set aside some training time each day if we want to success.

The benefits of exercise are well documented. Many of our top players have joined the gym in recent years and with the important decisions being made in the middle and endgame it is important to consider the aspects of physical fitness.

The widening of the conflict is important for consideration. One should not be satisfied with possible book draws. One has to strive to complicate the positions. Guliev further opines

Guliev has a great analytical style which is very useful for players. Let’s look at his analysis of opposite coloured bishops from the game Topalov- Greenfeld , Burgas 1994.

“The key strategic method when playing with opposite – coloured bishops in the middle game is to attempt to get hold of the initiative. An attack on the king is particularly dangerous. The stronger side starts to build his play along the squares that are the same colour as his bishop. When this happens successfully, the bishop works at its maximum, while the weaker side remains out of the games. This way, the side that has the initiative effectively plays with an extra piece. “

Now isn’t that powerful! Throughout the 446 pages these valuable nuggets of information I strewn throughout the book!

I still believe in studying books. The best games of top players allow us a glimpse into the life of a top player. You can see how they handle specific openings and how they prepare against specific opponents and variations.

I shall look forward to seeing all of you at the chess board later this year when the season begins. I wish all of you well.