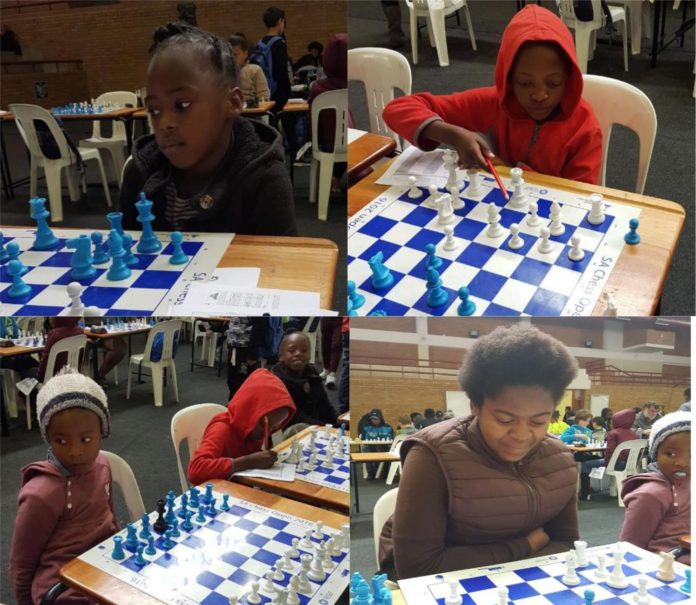 The chess community in Western Province has a new champion chess club. MRL Chess Club won the Premier division of the Chess Western Province league in Saturday 16 September at the Western Cape Sport School in Kuilsriver. The team was in sublime form and if we look at their results one can only applaud their magnificent performance. They won every match they played in the league and the results against the top clubs say it all. Let’s have a quick look at their results:

4.5/8 against runners- up African Chess Lounge

5/8 against Manyani and then the emphatic victories of 7.5/8 against UWC , 7/8 against Cape Town and seven against Uitisg. MRL did not lose a single match in the league.

Congratulations and well done to them for the astounding victory. Let’s have a quick look at their team. Spearheaded by FM Calvin Klaasen Calvin (Olympian debutant 2016) shows he meant business when he defeated the higher ranked IM Watu Kobese and FM Daniel Barrish and held board one with aplomb. He was never in trouble and even one loss he suffered was not enough to dent the enthusiasm he had for board one. Board two was that old war horse CM Maxwell Solomon (Olympian 1992, 1994 and 2000). He held his own on board two and could always be counted on to play hard with his passionate embrace of the chess struggle on the board. Board three Graham Solomon showed that he reserves his best for the league and was a rock on board three. The two brothers are of course brothers to GM Kenny Solomon so the talent runs deep!( I wonder who is the best at the family blitz!) Dietrich Laurie was a revelation on board four. He scored a host of points 9.5 to easily be the go to guy for points! Playing with his normal Andy Capp cap, this affable chap showed that true belief in one’s ability can do wonders! Lorenzo Van Niekerk the founder of MRL played as many games as he could in between his duties internationally. He never shirked his obligation to creative play because what I enjoy jousting with Lorenzo about is whether chess is a sport, art or science. He thrives on concepts and plays unorthodox chess. His chess has however brought him results and his solid performance will have pleased himself and he now is a WP League champion to boot. The other players all did duty including FM Lauren Van Niekerk, Justin Lynch, Christopher Londt, George Loverlot, Robyn Van Niekerk and Megan Van Niekerk. (Manager was Chantal Van Niekerk )! MRL – The league salutes you and congrats to all of you. So what does MRL stand for? Here are the pictures. You figure it out! Congrats to captain Robyn Van Niekerk!

African Chess Lounge assembled a mighty team but will have been disappointed that the assembled big guns did not play all the rounds. Barrish made a cameo appearance but lost about 54 rating points after going down to Klaasen and another. Charles did his best on board one but the three losses the club suffered to MRL, Steinitz and Cape Town was its undoing.

Steinitz probably only has its self to blame for not launching a bigger challenge, the early loss to Bellville (the first time ever having contested the league with them since 1992) dented their chances immensely. The draw against UCT and the losses to MRL and Stellenbosch put paid to their chances.

On the other end of the spectrum Uitsig didn’t win a a single match in the league and will be relegated. Mitchell’s Plain also makes the drop after winning one match against UWC but then drawing three others. They need another star player as Seth Riley cannot do it on his own.

Kudos to Grassy Park for staying in the Premiership as they played with no real stars apart from SA Under 16 champ Jordan Verster but held their own in the Premier. I am reminded that in order to beat a grandmaster one must learn to draw with a Grandmaster. In this case they drew three times and won twice.

In the B section Blackjacks makes a nice return to the Premier. This team spearheaded by Dr Simphiwe Baloyi showed their class by going through the league undefeated. They played strong chess and what I like about them is that they are normal guys from Matroosfontein, Elsies River and surrounding areas who just enjoy their chess. Llewellin Louw take a bow for your leadership.

CPUT well done for your second place. You now join UWC and UCT in the Premier. The universities are always infused with players from different areas and it makes things difficult to build continuity but they have been playing consistent chess.

Steinitz B matched their A section counterparts by ending third in the league as well. Well done Roland and colleague. The team is led on board one by 13 year old Andreas De Jager who held down the top board!

On the bottom end of the scale Goodwood and Sanlam gets relegated to the C section after both teams failed to win a match. Sanlam consists of employees from the giant Insurance company and I am sure they will recover. Goodwood is a proud club based at the Goodwood library and will bounce back I am sure.

In the C division Grassy Park outpaced the opposition and jumped into the B section of the WP league. This team has grit and is tough competitors. I like the fact that Charne Woolf plays for them and they have some boys from the hood finishing the complement. But can they play chess. Of course! Well done Ricardo Minnaar for gaining promotion!

Steinitz C joins Steinitz B in the B division after ending with a silver medal in this division. The team consists mostly of juniors showed their mettle by only one game. In bronze position was Aurecon who will I am sure contest the top positions next year and aim for promotion.

Simonstown and UCT C bow out from this division. I am sure the students will regroup next year and Simonstown now goes to the D Division.

Blackjacks B ensured promotion to the C division. The guys contested hard and I recognised the players had the conviction to want to play up. Well done Blackjacks. Maties ended joint first but third on tiebreak. They were led by WFM Michelle Fisher.

The section had 39 teams and was well contested. This is our development league and it is very active. Table View tried to win the league with 2000 rated Amini Daud and Observatory was led by Taurique Jenkins. Clubs from Paarl also contested and I noted the Drakenstein Dragons march.