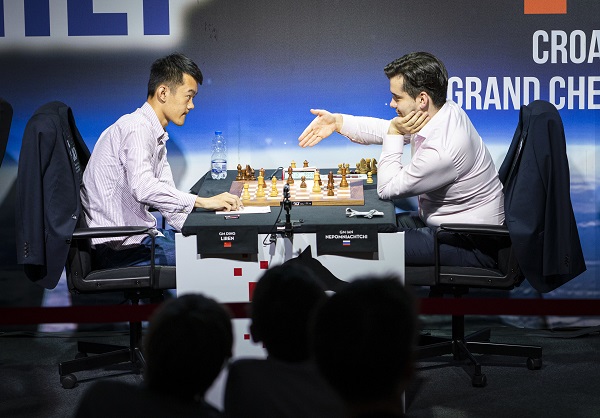 Today’s combative round created a shakeup in tournament standings. The players gave their all before heading into the day off, resulting in five decisive games. At the halfway point, there are now three co-leaders. Ian Nepomniachtchi suffered his first loss against Ding Liren, who wins his second game in a row. With wins over Hikaru Nakamura and Shakhriyar Mamedyarov respectively, Magnus Carlsen and Wesley So joined Nepomniachtchi in the lead. A crucial matchup is in store after the players return from the rest day; Carlsen and Nepomniachtchi will be facing off on Wednesday in round 7. Carlsen will have the black pieces and has never defeated Nepomniachtchi in classical chess. The second half of the tournament promises to be thrilling.

Nepomniachtchi chose an unpopular line against the English opening, which scores very poorly for black. The leader of the tournament ran into trouble immediately as he didn’t manage to castle on time and the center blew wide open, opening the files aiming at his king. By move 20, Ding Liren was already in a winning position. Nepomniachtchi resisted for 15 more moves, but with precise play the Chinese player put away his opponent without giving him any chances. Ding Liren delighted the fans with his quick analysis of the wild and complicated lines during his postgame interview with Maurice Ashley. With this result, he is now only half a point behind the leaders.

Historically, Carlsen has been a nightmare of an opponent for Nakamura, and today was not much better for the US Champion. Nakamura deviated from the line he played against Caruana and Karjakin earlier in the tournament on move nine. Interestingly enough, the two followed the game between Anand and Carlsen from the 2014 match, where Carlsen had the White pieces. Nakamura decided to simplify the game through tactical means but missed a key move which left all his pieces hanging. He was forced to give up his kingside pawns and never recovered the material loss. This win brings their lifetime score to 14-1 in favour of the World Champion.

Wesley So vs Shakhriyar Mamedyarov 1-0

Mamedyarov’s poor play finally caught up to him. After surviving two losing positions, the Azeri star did not find forgiveness in the hands of his opponent. Mamedyarov played a pawn sacrifice line in the English opening implemented by one of Carlsen’s seconds and Paris GCT wildcard, Daniil Dubov. The American played a different idea on move seven, entering a more pleasant opposite colored bishop middlegame. Instead of giving up a pawn leading to a pawn down endgame, Mamedyarov played provocatively, weakening his kingside. So found a way to penetrate with his pieces after a pawn sacrifice, finishing his opponent off in less than 30 moves.

Caruana described the line he played in the Ruy Lopez as one with a dubious reputation but not entirely bad. The players were out of book and on their own shortly, entering a complex middle game. Caruana played enterprising chess, unafraid to weaken his own kingside in order to provoke weaknesses in the enemy camp. The Frenchman had several problems in his position: terrible dark squared bishop, a vulnerable king and the inability to exploit his opponent’s kingside. Caruana played an excellent game, maneuvering his pieces into better squares as his opponent had to defend one weakness after another. Vachier-Lagrave resigned once it became clear that the loss of material was inevitable.

The Berlin Defense is not popular with the chess fans but is a common occurrence at the top level. Aronian played a novelty on move 12 with the idea to exchange the dark squared bishops. Trouble for Karjakin began when his king moved to the queenside, taking the long route to organize his pieces. Aronian sacrificed the exchange, keeping a strong passed pawn on the 6th rank which dominated Karjakin’s light squared bishop. The Armenian showed flawless technique by choosing to maintain control over the position instead of winning material and ultimately, forcing his opponent to give back the material under far less favorable circumstances. Karjakin resigned on move 55, as his opponent’s bishop, knight and passed e7 pawn were far more superior to his rook.

Levon Aronian analyzing after the game

The only peaceful result of the day was between Giri and Anand. The players followed the game in the Open Ruy Lopez that Giri had played against Mamedyarov last year. The aforementioned game led to an endgame after 20 moves and ended in a draw after a long struggle.  Anand found an improvement which gave him an easier equality in the same endgame. Giri did manage to win a pawn in the rook endgame, but with limited pawns on the board, the former World Champion held without difficulty.