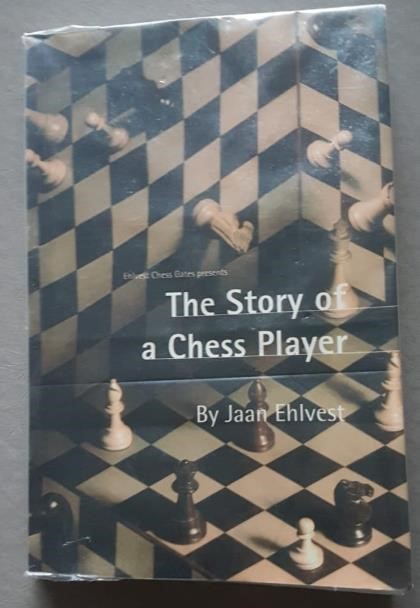 Over the last thirty years I have assembled quite a nice library. There are many books in my library that I bought over the years from different players who may have retired and from book stores that I sometimes forget I have. One book that I was delighted to read this month was “the Story of a Chess Player” by Jaan Ehlvest.

Grandmaster Elvest is from Estonia. The most famous player from Estonia was of course Paul Keres.

The blurb at the back of the book states the following ” Winner if the World Open in 2003, the New York Open in 1994 and the European Junior championships in 1983 and many other championships titles , the Estonian born grandmaster shares his unique insights into what it takes to become one of the top chess players in the world. “

The Wikipeadia note for Jaan Ehlvest states “he is an Estonian- American grandmaster. He was Estonian Chess Champion in 1986 and since 2006 has represented the United States. He was Estonian athlete of the year in 1987 and 1989. From July 1990 to July 1991 he was among the top ten on the FIDE World rankings peaking at number five in January 1991.

I found the book fascinating in a number of aspects because Ehlvest is also one of the last products of the former Soviet school of chess as it was known to still play actively. Let’s have a look at what he says about certain aspects. One of the first chapters is headed “Secrets of Training in the Soviet Union”. He quotes Bovinnik who said “Chess is a part of culture, and if a culture is declining then Chess too will decline.”

Ehlvest’s mother enrolled him in a Chess school which was located in a majestic church in Tallinn. His coach was Tonu Truus who was a certified chess coach who had studied at an institute in Moscow for his credentials. In his high school years at the age of fourteen he was invited to the famous Botvinnik Chess School. It was according to Ehlvest (page 24) was the most famous chess school in the Soviet Union, not because of its high level of training, but rather because of the famous name attached to it. The first session took place on the Black Sea at a Pioneer camp called Orlyonok (the little eagle). The most famous Pioneer camp was Artek and this one was second. At that camp he joined players who would later on become grandmasters. Players such as Dolmatov, Yusupov,

Ehlvest then confirms (page 29) that during the winter, training camps were held in Armenia for prominent young players. These were usually the top players from each age group in the Soviet Union. These were usually run by officials responsible for worldwide competitions like the world juniors. He notes that grandmasters Averbach, Michailchishin and Beliavsky were among the lecturers there. The lectures were seldom published which gave the rise to the idea of ” secret training ” that people always imagined that went on in the Soviet Union. He opines that there were two reasons for Soviet superiority in chess – one is quantity and one is quality. The Soviet Union was a very big country involving numerous nationalities and many people attended chess schools in various cities. And then qualitatively many people studied at special institutes to become a qualified coach.

He then goes on to describe his professional career and some of the challenges that he experienced when the Soviet Union collapsed in 1989. He also touches on some personal matters such as alcohol abuse and other matters such as not getting invitations to Closed events even though he was in the top twenty in the world and had good results. I found the book insightful and will certainly go review his selection of games he provided in the book.

The lessons I took from the book and of course there are many are:

I shall continue to read more about the grandmasters because it is only through constant reading and reviewing our techniques and methodologies that we can succeed as a country. Some interesting facts about Estonia that I shall end off with are: