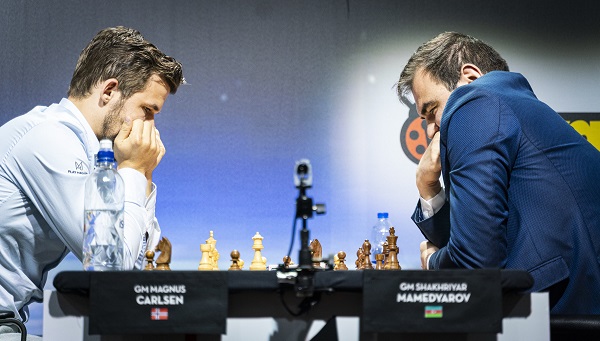 Round 4 RecapIan Nepomniachtchi maintained his full point lead over the field as a result of six draws across the board. After about thirty minutes of play, it seemed as though there would be a big shakeup in the standings; Magnus Carlsen was completely winning, while Nepomniachtchi was in big trouble against Sergey Karjakin. Alas, neither player was able to convert and the status quo was maintained. As a special treat for the viewers, Garry Kasparov joined the commentary to share his thoughts on the games. Tomorrow, Nepomniachtchi will face Nakamura with the black pieces, while Carlsen will sit across Karjakin, his 2016 World Championship challenger.

The leader of the tournament escaped unscathed in what could have been a big disaster. In an unusual turn of events, the typically quiet Giuoco Piano turned dangerous for white after only eight moves. Nepomniachtchi played an incorrect move order, which allowed his opponent to leave his king in the center and launch a kingside attack. After castling queenside and bringing his other rook into the action, Karjakin should have kept the game alive by avoiding a queen trade. Instead, he allowed a queenless endgame, letting his winning chances slip. Neither player was thrilled with their play. Nepomniachtchi was dissatisfied that he was hoping for a draw after eight moves, while Karjakin’s disappointment grew as he learned what a big edge the computers were giving him. Nepomniachtchi still remains in the lead with this result.

Magnus Carlsen described his 5-hour game as an epic struggle, but not a well-played game by any stretch of the imagination. The World Champion had a crushing position after 12 moves, but got tempted by a committal continuation instead of opting for a simpler edge. Carlsen’s choice was an objectively worse continuation and gave his opponent the opportunity to regroup and even turn the tables. It’s interesting to note that Mamedyarov is the last person to have defeated the Norwegian back in July of 2018. After several mistakes from both sides, the players reached an endgame where Carlsen had a rook and a passed pawn for Mamedyarov’s knight and two pawns. The World Champion had to give up his material for the passed pawns, ending the game with only kings and a knight left on the board.

Wesley So vs Viswanathan Anand ½ – ½

With another draw, Wesley So remains tied for second place with Carlsen, a full point behind Nepomniachtchi. The duo avoided any theoretical discussions and entered a brand new position by move six in the English Opening. There was one critical moment in the game where So could have fought for an advantage by breaking up his opponent’s pawn chain. After the opportunity had passed, the game ended in a perpetual in under 30 moves, following a lot of piece exchanges.

Caruana was disappointed with the result of his game, as he liked his position throughout and felt that he had the better chances. Aronian’s unambitious opening choice allowed his opponent to put all his pieces on their best squares and start pushing his kingside pawns. At the critical moment on move 28, the former US Champion decided to prepare a pawn break instead of calculating the complications and playing the more combative try. This gave Aronian an opportunity to quickly start trading pieces, which defused Caruana’s attack. The game ended with a threefold repetition.

The rollercoaster of a game ended in a draw due to mutual blunders. Vachier-Lagrave thought that his position would be dodgy had his opponent played c5 on move 19 instead of g5. Giri felt his kingside attack would be crushing and gave up a central pawn as he committed to his plan. On move 33, the Dutchman played a move that looked like it spelled impending doom for his opponent, but in fact was a blunder. As Giri sunk more into thought, he realized that he saw ghosts in the position and his sacrificial plan was a bluff. The correct continuation required the Frenchman to enter some scary variation that involved grabbing a lot of material and running with his king. Seeing ghosts himself, Vachier-Lagrave went for the safe line, giving up a queen for a rook, a knight and a passed pawn. Sensing some danger, Giri gave up his rook for the knight to end the game with a perpetual.

Both players have drawn all their games since their round one loss. Ding Liren followed Nakamura’s game from the US Championship earlier this year, playing a novelty on move 14. However, his new approach did not put enough pressure on Nakamura, who simply traded all the pieces, entering a minor piece endgame where neither side managed to pose any difficulties for their opponents. Draw was agreed on move 45.

Together is a Wonderful Place To Be: Congratulations David & Ann Fawole