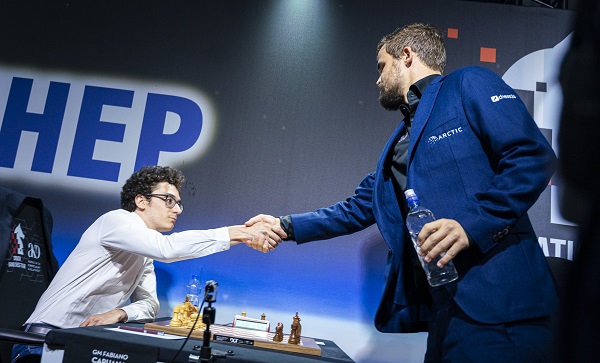 Ian Nepomniachtchi extended his lead to a full point after defeating Shakhriyar Mamedyarov with the black pieces. With this result, Nepomniachtchi now has a perfect score of 3/3 and is at his personal peak rating of 2790. Magnus Carlsen and Wesley So are tied for second place after drawing Fabiano Caruana and Anish Giri respectively. Tomorrow, all three will have the white pieces and will thus try to score a full point.

Mamedyarov played really provocative chess, essentially inviting an attack against his king. A knight trade on the d5 square killed off his own dark squared bishop, while only creating one weakness in black’s camp – the c7 pawn. By focusing on the queenside and grabbing the pawn, Mamedyarov abandoned his kingside, where Nepomniachtchi’s pieces were concentrated. In a desperate attempt to muddy the waters, the Azeri star offered a knight sacrifice. Nepomniachtchi simply ignored the offer, instead pushing his h-pawn down the board. The attack devastated white’s vulnerable king, forcing a resignation on move 32 after black’s bishop joined the action.

Ian Nepomniachtchi with a young fan

The highly anticipated encounter did not produce a decisive result but was a titanic battle nonetheless. Carlsen deviated from his usual Sveshnikov, the opening he played exclusively against Caruana in their match. Instead, a rare line in the Ruy Lopez was the opening of the choice. Both players agreed that the game was mostly balanced until move 39, when Carlsen blundered a pawn. Luckily for him, the players were already in an opposite color bishop endgame. After the rook exchange, Caruana was left with two connected passed pawns but also with the “wrong” color bishop – he needed a light square bishop to promote his “a” pawn. Carlsen gave up his bishop for the two connected pawns and ran his king to the a8 square, ending the game in a well known theoretically drawn position.

Until move 16, the players followed the round 1 game between Caruana and Nakamura. Karjakin did not play the dynamic line Caruana chose and instead repeated his own game against Anand from May of this year. Nakamura improved on Anand’s play, entering a pawn down endgame but maintaining active pieces and good compensation. Kajrakin’s 78-move long attempt did not prove fruitful as the pawn up rook ending simply did offer enough winning chances. The game ended in a draw with only kings left on the board.

There was no gift on the board in store for Anish Giri on his birthday. The 25-year-old expanded on the queenside in Guico Panno, offering a pawn sacrifice on move 14, which was declined by his opponent. In the postgame analysis, the Dutchman showed why he rejected the natural looking move, which the commentators thought would give him the advantage. Instead, he chose a path that led to a pawn up endgame, missing a move by So which gained the pawn back. The game ended in a draw once the material equalized.

Anish Giri and Wesley So

Ding Liren repeated a line that he has employed successfully, including a win in the Wijk aan Zee super tournament earlier this year. Maxime Vachier-Lagrave played a novelty on move 14, knowing that it leads to a draw with perfect play. His reasoning was that Ding Liren avoided this line against him last month in Norway, leaving the Frenchman assuming that there was a problem in the Chinese superstar’s preparation. He explained that it was a 50/50 risk, as there was a chance his opponent may not know or remember his preparation. Ding Liren was out of book by move 23, but was able to figure the details of the position. The game ended in a draw with a perpetual.

“I think we spoiled the audience with the first round. Now we are back to our usual business”, Levon Aronian joked in the post game interview. The quiet Giuoco Piano was an uneventful affair that ended in 40 moves. The pieces came off one by one, with the players entering a double rook ending on move 25. Once one pair of rooks were swapped off the board, the game ended in a draw shortly after.