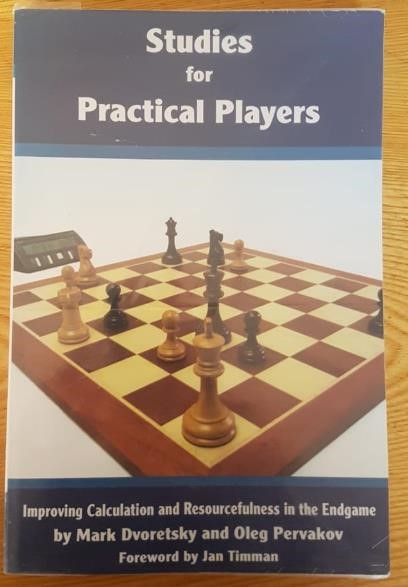 I recently completed a book called the emperor of Ocean Park by Professor Stephen L. Carter. The book is about the death of a judge. He left clues which only his son may be able to figure out. Part of the clues are locked up in a chess problem that must be solved so that the son can go to the next clue.

So, it had me thinking. What is the difference between a puzzle, a problem and a study? For this I had to visit my chess library. I decided to consult ” the Oxford Companion to Chess ” by Hooper and Whyld. They define the terms as follows;

Problem is a composition accompanied by stipulations, provided for they solver, stating that one side is to give mate or achieve some other aim in a set number of moves, and stating or implying which side is to move first. The earliest known problems date from the 9th century when composers made use of tactical devices such as square vacation batteries, half batteries, self-blocks and decoys. The authors spend a full three pages drinking the term problem.

Puzzles are defined as generally problems using chess pieces or boards but not invoking the king’s royal powers. The best-known puzzle is probably the knights tour. Many puzzles are mathematical in nature. For example, how many different rectangles can be outlined on a Chess- board. The answer is 1,296 of which 204 are squares.

A Study is defined as a legal position usually composed and rarely from play that is accompanied by the stipulation for the solver that one side (usually White) is to win or force a draw. According to the Piran Codex there should be uniqueness of solution (I.e. only one satisfactory move for White each time he plays) against Black’s best defence. The composer intends this line of play to be the main variation and it often ends with a tactical denouement adding piquancy. According to the authors study composition reached a high level during the great days of Islamic chess in the 9th and 10th centuries. Subsequently the art lay almost neglected until about 1852 when Kling and Horwitz published a work called Chess Studies; or endings of Games containing 207 positions.

In the 1890’s a distinct advance was made principally by Troitsky, Rinck, and the German Sehwers. They were followed by the Platov brothers and K. A. L. Kubbel and since then Soviet composers have dominated the files.

Www.chessbase recently ran an interesting article on Oleg Pervakov. He released a second book which he was writing with Mark Dvoretsky. I have a copy of the first book that he released together with the latter called Studies for the Practical Players (Improving Calculation and Resourcefulness in the Endgame) (2009).

Oleg Pervakov writes in the 2009 book ” back in 1910, the classic study composer Alexei Troitsky wrote ” a study is the more valuable, the more complex it is – the richer in ideas. The most attractive aspect of chess is the struggle. This what one must strive chiefly to depict, by leaving the defeated side as many defensive resources as possible in few course of the solution”

Pervakov goes on to point out that because there are no longer adjourned games, players do not have the opportunity to thoroughly analyse the end age they have reached. Now when the outcome of a game is not infrequently decided under the constraint of extremely limited time, the ability to orient oneself unfailingly in the endgame has become practically a priceless qualify for the Chess player. The book is very interesting because I enjoy puzzles, problems and studies and positions from actual play!

GM Jan Timman wrote the foreword to the above book and he too released a book called Studies and Games. The book was released in 1983 and examines 21 endgame studies which he composed over the years and ten analysed games played over a period of time.

Leonard Rietstein in his wonderful book ” A History of chess in South Africa ( 2003) writes that the first problem published in a South African Newspaper was published in 1882 in the Daily Independent, Kimberley on 9 December 1882. I give the puzzle here. Readers can send their answer to me on Lyndon.bouah@gmail.com

All the newspapers of the day gave prominence to chess problems. Newspapers from the Cape Times to the Queenstown Daily Representatives had a column with a problem. In 1934 the South African Chess Problem Society was formed with its own monthly publication.

In 1933 South Africa for first time entered a team in the annual international problem-solving tournament run by the International Chess Problem Board. South Africa fared badly, only coming above Finland in points scored. In 1934 the South African team did much better, coming 7th out of 12 competing countries. The ten-man team scored 1885 points outbid a possible 2000 with William Kruger and H. Smith the top scorers, each with 198 points.

I recently purchased a book entitled 123 Chess Problems by Jan Strydom. It states in the Introduction that Dr Jan Strydom was born in 1940 and in 1962 he published his first problem. His early problems gave evidence of unusual talent, and very soon he established a reputation as one of the finest of three move composers. He published prolifically between 1962 and 1970, and then from 1976 to 1980 and a third which started in 1990. Dr Strydom’s problems were used in the 1994 World Chess Solving Championship. He achieved great success in the field of learning and learning disabilities in which he completed his doctorate and completed a second doctorate in philosophy.

Mr Rietstein asked Dr Strydom to select some of the best early problems for the Rietstein book. I have decided to add them here so that the readers can attempt to solve it! Good luck. In my next article I shall give a selection of Dr Strydom’s problems.