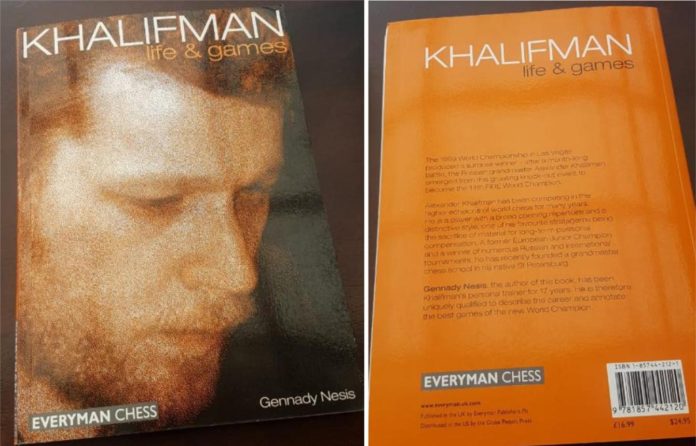 I have been fascinated with chess since about 1987. In this time we were witness to the great struggles between the two K’s. Grandmasters Karpov and Kasparov dominated the chess horizon with impressive victories in many countries. At the same time however the Soviet Union had many players who were still unknown in the West. One of these players was Grandmaster Alexander Khalifman.

I saw Grandmaster Khalifman for the first time in 2002 when I was captain of the South African team at the Bled Olympiad. He always wore his players tag on his back and he strode the hall like a colossus when it was his turn to move. He was part of the Russian team together with Kasparov that would win the Olympiad. (This was also the Olympiad where IM Robert Gwaze from Zimbabwe scored 9/9 to win the gold medal on board one ahead of Kasparov).

I recently bought the book Khalifman (Life and Games by Gennady Nesis) published by Everyman Chess (2000). Every world champion must be studied because each one in my opinion adds to the rich tapestry of chess. Their distinctive style must be studied and absorbed and we as ordinary players must see how best to use it in our games. Khalifman was born in 1966 and was declared a USSR Master of Sport in 1963 and became an International Master in 1986 and a grandmaster in 1990. He was the USSR junior Champion in 1982 and 1984. He was also part of the Russian team that won the Olympiad in 1992. He has a string of impressive results and of course, the crowning glory was the win in Las Vegas of the World Championship when he became world champion.

In the introductory pages Nesis introduces Khalifman to the reader with the following passage “it is amazing. No one plays like that. How does he give up material just like that, and then play on as if

nothing has happened. “I remembered these words when I played through his games. For Khalifman, material was only a factor in the chess game. For many of us, we are scared to go behind in material. He with no pretension simply sacrificed a pawn or piece if he believes that he will obtain compensation.

Khalifman in his first interview in 1982 stated that he was taught by his father and thanks to Averbakh and Beilin, after completing with them the “A Journey into the Kingdom of chess’. Their wonderful book he says led me to the Pioneers palace. There for nine years now I have been studying with Vasily Byshev and at home the lessons of Chigorin, Alekhine, Lasker, Capablanca, Nimzowitsch…. “

Nesis gives the reader a fascinating insight into the Soviet machinery at the time. The events that were organised, the difficulties in obtaining visas to play overseas and also the invitations that were so coveted were not easily obtained by Khalifman…. In Moscow 1988 at the 55th USSR where he

came a modest 14th he was interviewed and this was his reply to some of the questions….

What did the championship give you?

Khalifman replies. It confirmed that I am an amateur. To be a professional I would pick out three main factors: a well thought system of preparation for a tournament, a different approach to the game and a greater sense of responsibility.

A professional should be protected in all respects: in the sense of being physically and psychologically prepared, and theoretically well prepared, it must not happen that his opponent chooses an opening for which he is not prepared, and catches him unawares. Thanks to his ability to set himself the correct aim both in the tournament and in each specific game, the professional is able to obtain the best possible results. An amateur does not possess this ability, and as a consequence he does not score as many points as he should.

In 1999 Khalifman won the FIDE World Championship in Las Vegas. It is true that not all the worlds strongest players were in attendance but the event had enough of the leading grandmasters. He beat the Indian grandmaster Barua in round one, then GM Kamsky, then GM Polgar. He then defeated Nisipeanu and then in the final beat Vladimir Akopian. An interview was conducted after this in St Petersburg in which the new world champion gave his views. Some of his views were quite striking. In one of these he stated that a reduction in players from the developing third world countries ( and three players from Africa for the moment ) should be considered and that were too many….” perhaps their standard isn’t up to that level. “I was quite taken aback by that statement

and put the book away for a week while I was thinking about that statement. I decided that in 1999 perhaps that may have been the case but chess in Africa and in third world countries have developed quite nicely that we have sufficient players at 2600 and one at 2700 that we as Africans can rightly take our place. It did take me a week though of reflection to decide to continue to study Khalifman!

There is an extensive games section that Nesis ends off with. I was pleasantly surprised to find that the Benko Gambit was one of Khalifman’s weapons that he used at the highest level. This is also one

of my favourite openings. It is a rich pawn sacrifice that allows play with initiative. He used it at the top level for many years and scored many famous victories. If you have an opportunity, do check out this book with 96 annotated games from the top level of chess do so. It will add to your understanding of chess in the Soviet Union in the 1970’s and 1980’s.

Enjoy the day further and I look forward to meeting you at the Steinitz Open which will be between 5-7 April 2019. https://www.steinitzchessclub.co.za/festival2019.php