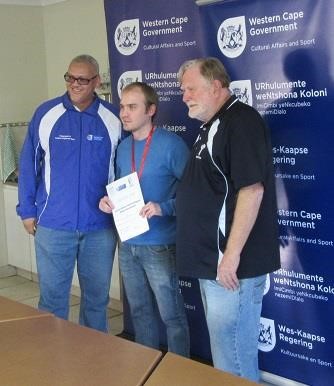 Winter is coming. This familiar phrase has become ominous in television series. I recently competed in the Cape Town Blitz won by IM Watu Kobese and was surprised by some of the questions posed to the arbiter before the time. How many illegal moves can a player make? Here I was thinking I am going to checkmate my opponent with legal moves! And then the one that nearly tilted me off my chair ” may we capture the King” now I thought we were not in the 1980’s any longer and yet here was a player who wanted to be a modern-day King Slayer. A real Jamie Lannister or Anya Starke. He was however soon disabused from his notion and told to claim. So fortunately for the Greenpoint Bowls Club there would be no blood spilt in their beautiful clubhouse on that night. So, let’s see what’s on offer during this winter season in the Western Cape.

The first event that will be open for everyone is the WP Open which will take place the weekend of the 25t and 26th of May. The WP Open is a six round event that will take place in Grassy Park. The WP Open is one of our traditional events in Cape Town and this year us divided into different sections. the time control is quite a fast paced one and you should prepare for this. The event being a six rounder qualifies as part of the Grand Prix, so it is important for players that are chasing Grand Prix Rating point. I must however request our chess authorities to ensure that later events have longer time controls. I know that the modern world is moving to faster time controls, but Classical Chess is still the mark of a good event and a good player. We need to perhaps designate some of our events for the longer time control. This will also ensure that our senior players can use the event as a training ground for when they play African Individuals, Commonwealth or the All African Games. The transition from 60/60 to normal classical time controls can be difficult and may take a few rounds. Be that as it may it promises to be a great event. I have not checked the Grand Prix Standings but will not be surprised is IM Watu Kobese has not clinched the Olympiad spot already. He has turned in some superlative performances and will look to build on this one.

The Rapid Season is coming!

The next event following that is the Mitchell’s Open. The event is a Rapid with some fantastic Prize money. Do have a good look at the prizes.

Of course, players will be playing quite rapidly because there may be some Liverpool fans as the Champions League final is the same evening against Tottenham Hotspurs. did you know

that Grandmaster Simen Agdestein, the first Norwegian grandmaster, was also the first person to represent their country at chess and football! Spurs had a famous footballer Ossie Ardiles from Argentina who played correspondence chess. He stated in an interview that he devoted ten to twelve hours per week studying chess (The complete chess addict by Mike Fox and Richard James, page 52)

Reggie Sinden has sent me some photos of previous members of Mitchell’s Plain. I spotted Rodney Williams who was a SA schools player with me in 1988 and who went on to found Capablanca Chess club with Virgil Fritz in 2000. Rodney stopped playing for a few years and then stormed back to win the 2001 WP Open.

The next prominent figure is Lourenzo Van Niekerk who is the founder of MRL Chess Club. MRL won the WP league in 2017 and I recall vividly Lourenzo driving from Mossel Bay to play his league games for Mitchell’s Plain when he was still working in Mossel Bay. Mitchell’s Plain indeed has a proud history of strong chess and I have now received word that some Free State players may travel down. In the great Game of Thrones tradition, the players in the south, may be called upon to repel the northern invaders who intend taking the R10 000 first prize away to the north.

The event the following week is the DSK Rapid which is organised by the German School. The event is a classy affair and last attracted a good field. The defending champion Candidate Master Lyndon Bouah will be doing his best to retain this title which he won last year! The chess is good, and that

tuckshop has some of the best Bratwurst and soup you can find in Cape Town.

That same weekend starting on Friday the 7th of June the Department of Cultural Affairs and Sport will be hosting an educational conference at the Cape Town International Convention Centre. This conference will look at after school programmes and how it can assist disadvantaged youth. Speaking at the conference is Ugandan Phiona Mutesi, the Queen of Katwe. She will be talking about her life as the movie is modelled on her. She speaks on the Friday and on the Saturday afternoon there will be a free screening of the movie at the Convention Centre in the afternoon after the conference. So, bring your popcorn along to watch the Queen of Katwe and to meet Phiona. She will be accompanied by her coach Robert Katende. I will be working out the final arrangements and will then inform Chess Western Cape and the various chess communities. It will be great to support the DSK and the Queen of Katwe screening.

The following weekend – 15 June 2019 is the Imam Haron Rapid event that will be an eight round rapid at Islamia College in Imam Haron Road, Crawford. Imam Haron spent 123 days in detention starting in May 1969 and was then killed in detention by the Security Branch police in September 1969. He was one of the first anti-apartheid activists killed. The Department of Cultural Affairs and Sport is partnering with the Imam Haron Committee to commemorate the fiftieth anniversary of Imam Haron’s death. Imam Haron was also the uncle of Dr Omar Esau, the chess leader of our province in the Western Cape. Let us support this event.

The weekend following which will be 21 June is the Oudtshoorn Open. The Oudtshoorn Open is part of the sport festival that they host each year. The event is traditionally contested by participants from the entire Western Cape.

The weekend of the 28th of June belongs to the Knysna Oyster festival. This will be a 25/25 Rapid event which is part of the Knysna Oyster Festival. The event has come a long way and this year the organiser Mr. Terry Quirk and Eden Chess union is asking for your full support. For the adventurous you can start the morning at six am with a marathon that starts in the Knysna Forest and ends close to the chess venue. So get your running shoes on and rapid thoughts ready, the entry form will be out in a few days time.

The event is well supported by the Eden chess community and attracts players from the Eastern Cape and WP. Last year Cape Winelands Vice President Heinrich Basson gave an excellent account of himself!