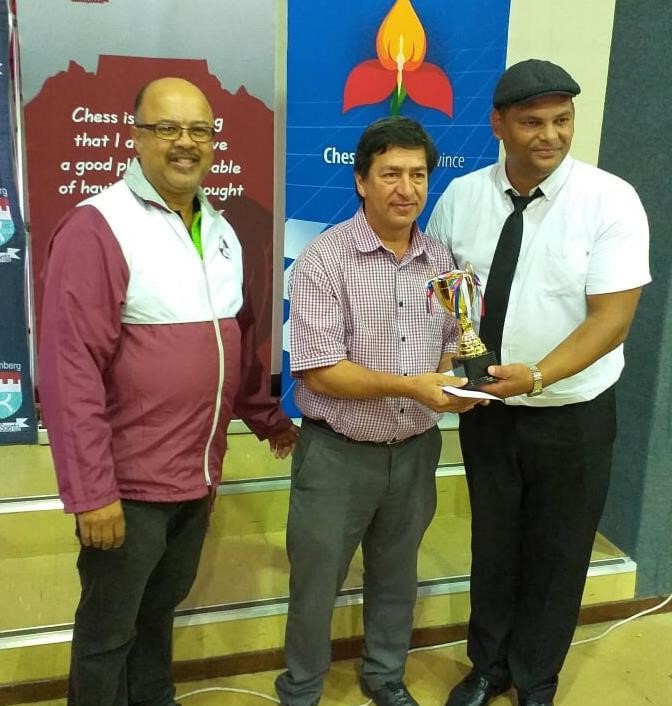 The Steinitz Open organised to celebrate the 42nd anniversary of the club ended this afternoon in a great victory for IM Watu Kobese. The event had four sections and was well contested.

Let’s have a look at the different sections. the U8 section was won by Jean Maritz.

In the C Section there were 93 players who finished the event with a number of other players finishing with less games. The C section female prizes were contested by 8 players and the players finished:

In the C section a chess puzzle book was awarded to Callum Lau. The book was presented to him by the author ninety-year-old Leonard Rietstein. Mr Rietstein was the first SA Olympiad captain to Munich in 1958 when SA made its debut at the Olympiad and was also the captain in 1966 in Cuba. He also presented a book to Themba Thompson.

In the main draw of Section C Andre Rhode scored 6/6. Rhode has not played for many years and has now re-joined Kraaifontein chess club. I remember him from a few decades back. So well done

Andre. Oliver Hufton was second with 5.5/6. He too was on full score going into the last round. He drew with Murray Steenkamp who scored five and was adjudged third on tiebreak. So, the decision by the Steinitz committee to share prize money led to the situation that 8 players received R50 each as they all scored 5/6. We may need to rethink this aspect as it delayed the prize giving a bit! Well done Andre.

In the B section WCM Natasha Joubert scored 3/6. This young lady won the SA Under 8 girls a few years ago and is continuing with her fine showing. 8 females competed in this section with five players scoring 2.

In the main draw published author and chess coach Edwin November showed a clean pair of heels to score 6/6. He too is from Kraaifontein chess club and I am sure his experience showed on the day. In second position from Blackjacks was Leatin Booys who scored 5.5/6. Leatin is making a comeback and has been competing in many an event. There were five players on five and on tiebreak these players were Shaun Willenberg from Steinitz, Tezihano Mnyasta from Crossroads, Dr Omar Esau from Manyanani, Luvuyo Nkosana and Sandiso Kedama from Crossroads. Well done to these players. Edwin November won R2000 with Leatin Booys winning R1000 and the others all winning R250 each.

In the Main section we had four females competing for the three female prizes. The games were hard fought. There was an unexpected winner in that Robyn Van Niekerk beat Kenny Willenberg in the final round to win the R700 first prize. Well done Robyn. in second position was WIM Dr Denise Bouah who beat WIM Jesse February in the final round to win R500. Sharing third was WIM Hesse February and WCM- elect Rebecca Selkirk. In the final round Selkirk lost to Glenn Willenberg who showed that his experience accumulated over the years can lead to a good show on the board. February and Bouah was a wild game and had the spectators on the edge of their seats. At some stage both players were winning, and the complications were unfathomable but when the dust cleared Bouah found herself up two pieces.

In the main draw IM Watu Kobese reeled off five straight wins and in the last round took the draw against Aguirre, I didn’t see the game, but Aguirre felt he was better but Kobese felt he had everything under control. Watu takes home R4000 for first prize. In his victory speech he thanked the organisers and praised the competitors for their fighting spirit and noted the rise of young talent in this event. Sharing second to fourth was PM Bryan Aguirre, FM Paul Gluckman, and SA Closed Co-Champion FM Calvin Klaasen. Paul Gluckman beat SA over fifty champion Mark Lewis in the last round in a bruising encounter. FM Klaasen beat Micheal James who was throwing everything but the kitchen zinc into the attack. Klaasen had everything under control and in the mutual time trouble triumphed at the end. Each of the three players took home R1660 each.

Other notable players include FM Dr Shabier Bhawoodien who scored 4.5. He blitzed WIM Bouah in the morning round even though the game was probably objectively a draw. In the second game he took the full point off Johann Schnabel who was having a fantastic event having beaten Michael James and WIM Jesse February. In sixth position was CM Dr Lyndon Bouah on 4 who probably saved a half point when he miscalculated against Ethan Samuels. I then set up a blockade to prevent Samuels from also taking his scalp. In recent weeks Ethan has been taking the scalp of many a top player and I soon predict that he will be edging very fast to 2000 given his play. FM Charles De Villiers also ended on 4 after tactically outplaying Alexander Van Der Merwe. It was a game for the ages with the seven-time SA Champion playing the diminutive Van Der Merwe who has already beaten Nakamura in a simul. The game was an Accelerated Dragon and although De Villiers won an early pawn Van Der Merwe kept creating small threats. It went down to the wire.

I had a few words with Gerrit Meiboom who informed me that his older brother Kees was cross at him for not mentioning the event earlier. The Meibooms are an old chess family with Kees having played in many a SA Closed. It was good to see Deon Pick who travelled in from Worcester. Dr Andrew Southey, Commonwealth Senior champion travelled in from Hermanus. Thanks WIM February who flew in from Nelson Mandela Bay to support the event. The event indeed felt like a mini SA Open with nine players over 2000 in the field. There were no easy games.

Thanks Steinitz. It is important that these events are hosted on an annual basis because it allows players an opportunity to compete against their fellow players on an equal basis. Sixty sixty with ten second increment is a great leveller. Roland Willenberg calls it old man’s blitz. The A section Games will be available via chess results later this week so do enjoy the games. Thanks to arbiters Leon De Jager, Andrew Talmarkes, Alfreda Louw and Anito Petersen for making this event pleasant to play in. To all 280 players who finally competed in the event Steinitz chess club thanks you.