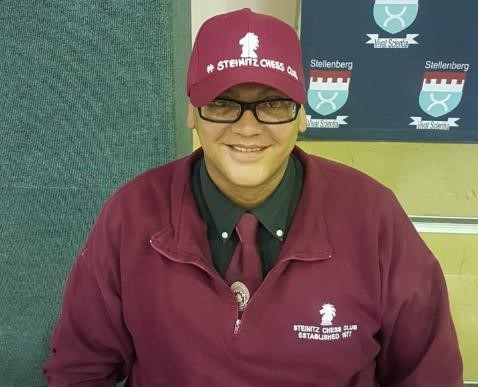 Before continuing with my opening address, please allow me to convey the following appreciation of thanks:

Steinitz Chess Club, started in 1977 chess by 6 scholars (including myself), celebrates its 42nd anniversary this month and has since 2007, been able to consistently gather the cream of chess players across the country, to annually join in its anniversary tournaments. 2007 tournament was won by then IM and now GM, Kenny Solomon.

Shabier Bhawoodien. We also welcome Craig Willenberg who won the event in 2012, and who was a joint winner last year as well.

I now declare the 2019 Steinitz Festival open, and hand you over to the Chief Arbiter, NA Leon De Jager.

Top seeds that lost in round one includes FM Charles De Villiers who lost to WIM Dr Denise Bouah in a tough struggle. Between the two of them they won about 8 SA Closed titles!!

I must reflect that six top players opponents didn’t pitch tonight. The six players without opponents IM watu Kobese, PM Bryan Aguirre, Athon Willenberg and WIM Jesse February, Robyn Van Niekerk, Gerrit Meiboom then graciously accepted that they will be paired again by hand. Well done to these six players who did not want default wins but rather wanted to play chess.

The second day of the event had its fair share of upsets and good chess. IM Watu Kobese is still dominating with his strong chess. I believe that the jerseys he brings to the event is his secret. He has two main jerseys one green and one blue and when those jerseys are present, I get scared. I’ve been playing against those jerseys since forever!

In the second round we had the Grob making its first appearance. Mr Ashley Schuller who normally competes for the best dressed prize essayed 1. g4 against his club mate Athon Willenberg. The game then continued along the lines of e5 2. h3 h5!!and on move five the rook found itself on H5 Let’s just say we couldn’t distinguish if the game was being played between 6-year-old or teenagers!!the Grob succeeded!! Dr Baloyi who is surgeon at the City Hospitals pressed home his advantage against WIM Jesse February. He played a good game. FM Paul Gluckman continues to impress with his solid chess and beat Alexander Van der Merwe. Alexander of course beat GM Nakamura a year ago in a simul!

The women participating are playing strong chess and Rebecca Selkirk who qualified for her WCM Title is certainly playing her heart out. WIM Bouah and Robyn Van Niekerk spends the entire duration fighting hard and I know that tomorrow they will be going for the jugular. Emil Schnabel has been playing impressive chess.

I’ve had a bit of an upside-down event. I was completely winning against Dr Shabier Bhawoodien and then I inexplicably allowed him back in the game which then petered out to a draw. I didn’t quite make the mental transition after this and PM Mark Lewis took full advantage of my frail mental state to take the full point. Note to self I must ask for a mental coaching session from Dr Denise Bouah next time this happens!! Well done SA over champion.

away instead touched the Nd4 which was the wrong knight and then promptly resigned. Players speculated that since Dr Southey is a vet that one horse looks the same as the other! Sorry Andrew!

The lower sections are all having their own championship. The B section and C section and the Under 8s seems to be enjoying themselves. I have noted that once the real games stop that the players immediately start playing friendlies also!!

Dr Esau had a good game against the author Edwin November. All three local and district chess presidents are playing. Eugene Steenkamp is playing Christian Maxwell from Cape Winelands as well and Dr Esau as the provincial president. There has been much debate about the time control. we are playing 60/60 with a ten second increment. Some players like others want a thirty second increment. So, the jury is out what the best format is. I’m sure players would prefer 90/90 so we may need to rethink matters next year and see what is best.

So, ladies and gentlemen come to Stellenberg High school tomorrow to watch the last two rounds which start at 9am. Some good chess will be played. In what event do you get nine players rated over 2000, various current and former SA Champions as well as a host of junior champions together with current and former members of the Olympiad team.

We have also noted that Watu Kobese has played two Willenbergs already so he may be doing a hat trick later if he meets Craig. There are are nine Willenbergs in the event, so you have a good chance of meeting at least a brother or son in the event!! Good luck for tomorrow.