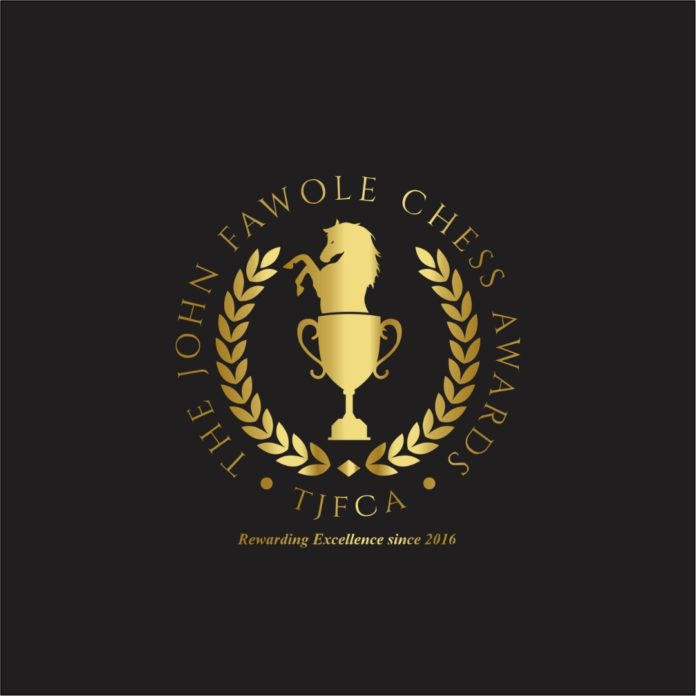 The John Fawole Chess award is a prestigious national chess award presented to Nigerian chess players both home and abroad. The key goal of the award is to celebrate excellence for chess players who have contributed immensely to the development of chess in Nigeria, either through an excellent representation of Nigeria in chess events or through a deliberate and charitable promotion of chess among the citizens of Nigeria.

The John Fawole Chess Awards is also an avenue for creating chess awareness and popularity and also a driving force to increase the motivation of chess players.

The Award is first of its kind in Nigeria and West Africa; this is majorly because even though we’ve had great players and people who are working really hard to see that chess is at the fore front of sports in Nigeria, there has never been a reputable and consistent platform of appreciating and recognizing performances of chess players, chess Arbiters, Administrators, Organizers and Coaches.

The John Fawole Chess Awards started in the year 2016 by FIDE Master John Oyeyemi Fawole, a former National Chess Champion (FIDE Instructor & US National Master) and a superb advocate of chess in Nigeria.

The John Fawole Chess Awards stands at par with (Nigeria Sports awards) and ever since inception in 2016, we’ve been able to organize awards online and give out over 30 Awards between 2016 & 2017. The year in review (2018) will have 40 Awards to be given out to chess players, coaches, organizers, trainers and administrators, for their excellence on and off the chess board.

More so, John Fawole chess is also actively involved in training and raising chess prodigies in Nigeria. This is done through our sister companies, BruvsChess Academy and BruvsChess Media.

Our hashtag on Social Media is #TheJohnFawoleChessAwards

The John Fawole Chess awards 2018 will have 20 major categories and 20 Awards of recognition for the year in review.

And 20 Awards of Recognition for icons who have contributed immensely to the development of Chess in Nigeria.

Awardees are chosen from a list of nominated individuals by their performances in the year in review. Online polls are then launched for chess players to vote which takes about a month for the voting window period. Next, is the panel of judges which includes the following names:

Moving forward the John Fawole chess awards aims at extending its Awards to also include players from West Africa and Africa as a whole and also to international personalities who have one way or another contributed to chess in Africa and the world beyond.

In addition, In the near future, we also want to add a cash prize to junior category of the awards for scholastic purposes and opportunities. It feels really good to have chess playing kid on scholarship based on their chess performances.