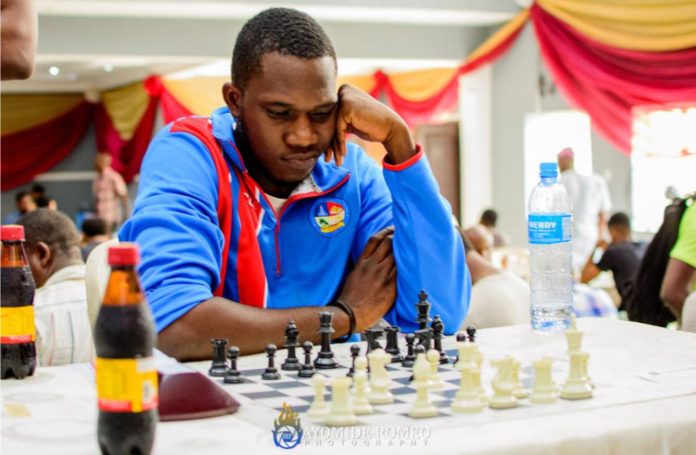 Nigerian Candidate Master Oragwu Chukwunonso light up the Bevik Divine Academy in Lagos after putting up an outstanding performance at the maiden 2019 e4 Geenius Chess Championship.

Starting the tournament ranked 9, Oragwu bolstered the fickleness of the Nigerian chess environment with his triumphant display; winning ahead of some of Nigeria’s weathered chess players.

Unbeaten throughout the event,Oragwu’s only relative ‘easy’ opposition came in the first two rounds as he topped unrated Adesina Olanrewaju and 1843 rated Ikuenomore Ayodeji Olumuyiwa in the said rounds respectively.

And then the sweating started in the third round as Oragwu battled it out with AGM Apemiye Austin who is rated above 2000. With class and precision, Oragwu beat his lower rated opponent.

But CM Chukwunonso’s woes were just beginning. It seemed each victory was bringing him more torment than relief. In the fourth round, Oragwu was paired against fourth seed, IM Balogun Oluwafemi who is a player in his own right who has represented West Africa at the Chess World Cup before. This was a battle that brought the playing area into acclaim. At the end, both players failed to dent each other’s armor as they drew their game.

The draw with IM Balogun no doubt inspired CM Chukwunonso to play calmly against two Nigerian chess giants in FM Anwuli Daniel and top seed IM Oladapu Adu in the remaining two rounds. But when you are destined to be glorious, even with seemingly little chances, you still go ahead and carry the day.

And that is what happened at Bevik Divine Academy, Car Wash Bus Stop, Egbeda/Idimu, Lagos, Nigeria. Against odds, Oragwu defeated FM Anwuli Daniel in the fifth round and stunned Adu in the sixth round to solely win the over 2000 rated category. Ajibola Olanrewaju and Abdulrahman Akintoye also remain undefeated at the e4 geenius Chess Championship.

In the below 2000 FIDE rated, Adeyinka Adewole emerged tops, while Okorodion Deron won the U-14 children category, just as Goodness Ekunke defeated his contenders to come out victorious in the U-10 cadre.

Over 200 male and female players featured in the maiden e4 Geenius Chess Championships which ran from April 12 – 14th, 2019.

Nescafe and Malta Guinness provided drinks to the participants of the national chess spectacle. organizers of the event also provided small chops for players to enjoy. Renowned Kennis FM radio station covered the event and aired the result on air.

The Nigerian Chess Federation was represented at the event by Mr Alhaji Durotoye (board member) and the media of the chess governing body.

Speaking at the occasion, organiser of the championship, Abel Soyoye said the event would help identify more talents and bring more value to chess in Nigeria. Mr Soyoye further added that the chess edition will be held annually.

More pictures of the event can be found on https://ayromeostudios.pixieset.com//e4-chess-championship-competition/