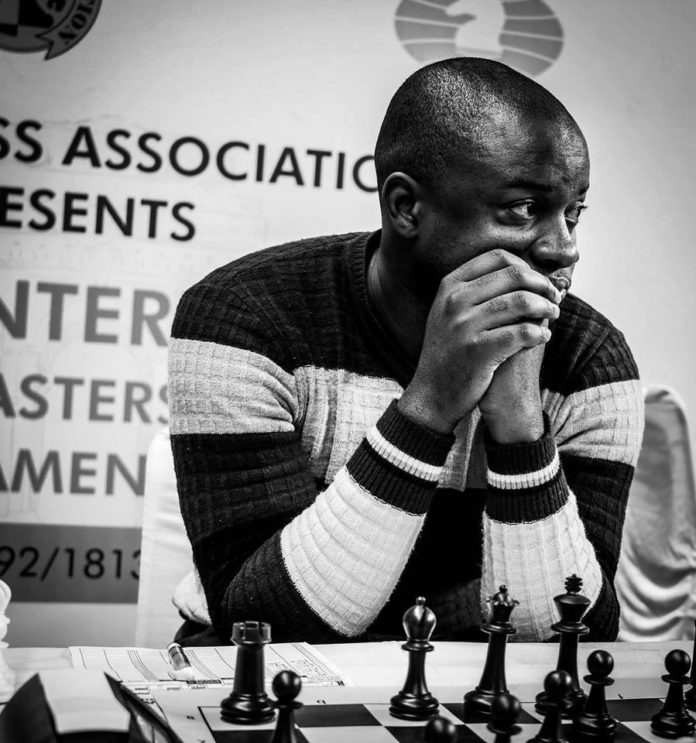 Zimbabwean Spencer Masango was again a glare of publicity at a Zambian premier chess event when he historically won the 2019 Zambia Closed Chess that ran from the 19th-21st April 2019 in Zambia’s capital, Lusaka.

The tournament was a closed event but Spencer from neighboring Zimbabwe was allowed to play as a guest player; the only non-Zambian among 113 participants in the Open Section. The usually calm and composed chess star produced some sublime chess to race to victory.

A highly tactical player, Spencer started his victorious campaign relatively stress-free after edging two under 1900s in the first two rounds; he was paired with 1777 rated Sakala Richard in the first round and Sakala Ronald (1862) in round two. But as the Swiss System works under the dogma of ‘the higher you go, the harder it gets’, Spencer was now beginning to feel the heat as his opposition increased in strength and playing standing.

But on most occasions, Spencer is known to be a nightmare when he lands his feet on Zambian soil. And just like that, he continued his grandiose walk to the dais of conquest by beating two over 2000 rated players in the third and fourth round in the form of Chabala Efford and Kantalamba Mushota respectively to be among the four players at the apogee of the tournament.

Going in the fifth round, Spencer was paired against Zulu Thomas, a seasoned player who is well abreast with the playing style of most Southern African chess giants. Spencer knew very well that, Thomas was perhaps his greatest obstacle thus far and that there was no room for a mistake or else his seemingly invincible armor would disintegrate into small pieces.

With the white pieces, Spencer is even more dangerous and he showed this by outclassing ‘Mr Dangote’ (a famous nickname for Thomas Zulu in his native Zambia). With such a monumental victory, Spencer set a stage for a lip-smacking battle with follow leader of the event Kaoma Micheal who equally had a perfect score of 5/5.

Micheal Kaoma carried the hopes of a nation. The Zambians knew very well that a loss for Micheal would be the end of their defense of Zambian territory and it would be ‘embarrassing’ for how would they be able to explain that one man from Zimbabwe took all of them in their own backyard and was triumphant? Worse still, Spencer is not even close to being Zimbabwe’s number one player; the two countries often times show hostility towards each other especially on social media where they both claim to a more superior chess country than the other.

But it seemed it was just the ‘Spencer Zambia Closed’ as the Zimbabwean again showed his insuperability with the white pieces by shuttering the Zambians last chance of redemption in their hopeful, Micheal, to solely leader the tournament.

In round 7, Spencer battled it out with the 2019 Africa Amateur Champion, CM James Dimba who was trailing by half a point. But Spencer was again merciless to the Zambian as he too was no match for the ‘Zimbabwean Nightmare’.

The tournament’s top seed, FM Douglas Munenga who was a full point behind was the last resistance for Spencer. Even if a draw was all what was needed for Spencer to carry the day, he chose to demolish Munenga to win the jumbo event with a once in a blue moon perfect score of 8/8!

And so it was that one man who started the tournament ranked 21st took on the whole mighty playing chess country and emerged a conqueror. This chess tale will never be forgotten by the Zambians. It is no ordinary chess tale. In this tale, a Zimbabwean ventured into ‘no man’s land’ where other regional chess greats never set foot for fear of being non-entities, and with a triumphant posture he walked out of the ‘gas chamber’ unscathed!

The 2019 Zambia Closed Chess Championships were held under the umbrella of the Chess Federation of Zambia and saw three International Masters, several decorated Zambia chess stars and one Zimbabwean take part.