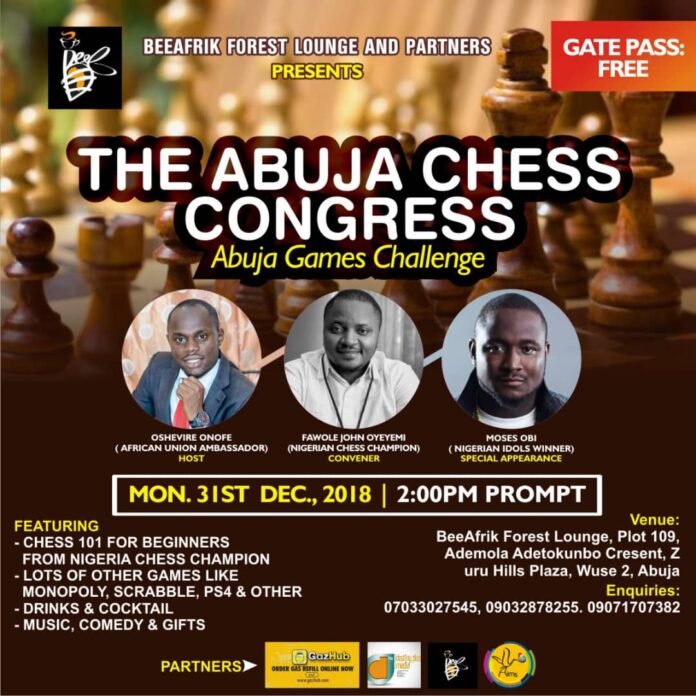 The Abuja Chess Congress 2018: The thrills, the training and the tournament!

It was the last day of 2018 in the Nation’s Capital, as the first edition of the Abuja Chess Congress began with much fun and glamour with the Abuja Twitter Community droving in, in their numbers for the game of wits with the Nigerian Chess Champion.
Contrary to expectations, several young ladies showed up to learn the game and have fun. Also Hazel Iwendi, a volunteer at Mentally Aware Nigeria Initiative (MANI) and Delta state Gold medalist at the just concluded National Sports  Festival Ms. Hafsat Bello Osagie participated in the training of participants.

The Chess tournament which was filled with fierce competition and rivalry with a FIDE titled Chess player among the tournament players. The scorching Abuja sun couldn’t keep back the passionate fans nor did the poor description of a notable landmark to the event center by the organizers detour the people.

BeeAfrik lounge was at it’s capacity when the congress host Ambassador Oshevire Onofe kicked started the event and the games convener Fawole John Oyeyemi, Nigerian Chess Champion made it worth it’s while as the evening unfolded with games, training and the Chess tournament.

The event management team public relations officer, Mr kelechi Udu an avid fan of the game himself ensured the participants were comfortable as the drinks, cocktail and music did the rest.

Chess enthusiast came from as far as Keffi, Nassarawa State to grace the chess congress and the Nigerian Idols Star, Moses Obi thrilled the audience to an acapella rendition of “the redemption song” which left the people in awe. He was also put on the hot seat to answer scintillating questions from his female fans.

The atmosphere was that of fun and laughter as the evening progressed. The participants were divided into different coaching and gaming groups after the first general Chess tutorial by Chess coach Mr. Adesoji Adegbie nicknamed “Mr.  black Bishop”.

A hard fought victory from a battle of many turns, hidden tears and theatrics eventually saw Mr. Byamer Felix crowned as the First Abuja Chess Congress tournament Winner, taking home and undisclosed cash reward for passion. He also got a branded t-shirt from LRG900 youth project organizers, presented to him by their representatives Chief (Amb.) Chinedu Nnawueba and Miss (Amb.) Dan deipre Bioekioghotua.

A raffle draw was also played courtesy LRG900 project organizers for all participants with two other winners going home with branded T-shirts.
The 2013/14 Nigerian Chess Champion, Fawole John Oyeyemi also gave out ten (10) free slots to participants to be part of his Chess Coaching Academy while promising to make the event a continuous one in 2019.

Abuja’s major online influencers also graced the occasion, with two of the thought leaders, self styled “Leo of Abuja” and “Abuja Pikin” representing the niche of influencers in showering praise on the organizers while highlighting places for improvement in the Abuja Chess Congress subsequent events.

Several positive feedbacks from the participants showed the event was a success and calls for a continuation was advocated for by the teeming participants.
The newest lounge in Ademola Adetokunbo Cresent,Wuse 2, Abuja, BeeAfrik lounge which hosted the event promised a discount charge for all the Abuja Chess Congress participants anytime they visited the lounge while showcasing some of their mouth watering delicacy in a classy lounge.

Participants took to social media, Twitter, to express their pleasure and experience before the event was even over and the Chess Congress official PR Mr. Kelechi Udu appreciated the Abuja Twitter Community and audience for gracing the event.
The Abuja Chess Congress rounded up with fun, glamour and excitement as new connections had been forged, bonds strengthened and the love of the Chess game reinvigorated as new Chess enthusiast now have the opportunity to train with the Nigerian Chess Champion. Amidst photos sessions and Joy, fans called it a night.

Chess in Africa Lanre Oluwalasinu - October 27, 2020
1
With an unsurprising 11 wins and a draw which included six consecutive wins, the ever solid Olarovfan, FM Adegboyega Adebayo aka Dabee...

Special Recognition Lanre Oluwalasinu - October 27, 2020
0
With a sterling performance of 5.5 over 7 and a performance rating of 2418, FM dbestsmiles (Abdulrahman Abdulraheem Akintoye) had won the...

Featured Admin - October 25, 2020
0
It has been a very trying period for our country and all of us. There is no way to describe in words...